The wheel of the year from the book "Ceremonies of the Seasons" by Jennifer Cole, showing the August/Early September segment as summer turns to Autumn. 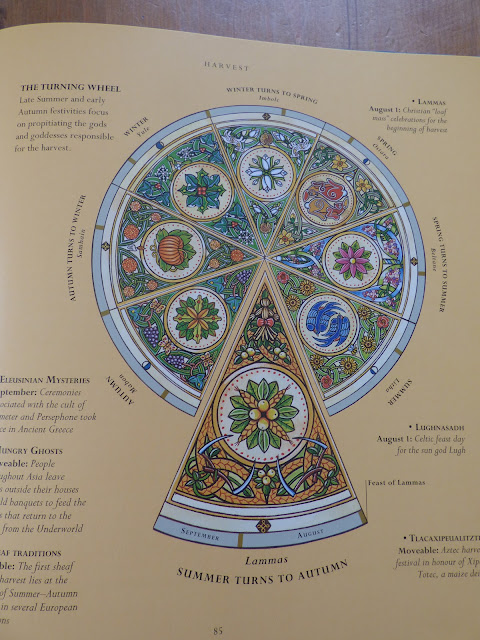 August brings the sheaves of corn,
Then the harvest home is borne.

Lammas, the 1st of August was one of the Celts 'cross quarter' days. .The dates that fall between the solstices and equinoxes that were used to mark the agricultural year. It was called Lughnasad Day after the Celtic God Lugh. According to ninth century Anglo-Saxon records Lammas or "hlaf-mass" meaning Loaf-Mass or Feast of Bread  was celebrated as the start of harvest.  The first loaf made from the years harvest was taken to church to be blessed and sacrificed so that all could be fed from the rest of the harvest.


After Lammas the corn ripens by night as well as by day.


The act of sacrifice at harvest is a reminder that we all follow the same path of life and death and reminds us to make the most of our time whilst we are here. Consider the passing of the summer and enjoy the bounties it has brought us and think how best to prepare for the coming autumn and winter.


The illustration below is from the August pages of The Diary of a Country Lady. It says that the name comes from Roman Emporer Augustus, because this was the month when he had his greatest good fortune. An extra day had to be added to August so that it wasn't inferior to July.......... named after Julius ....information  that Edith Holden took from the Encyclopedia Britannica. 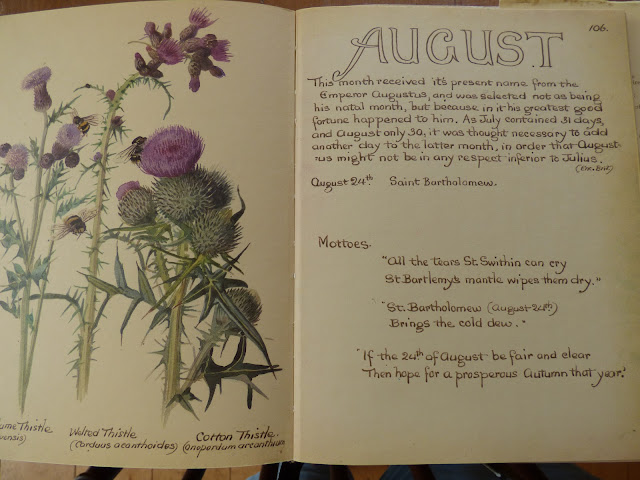 There are very few weather rhymes and sayings for August, maybe people were too busy with the harvest to make up rhymes.

Here in Suffolk harvest has started and the combines were out for several days before the wet weekend.............for the barley first. The wheat crop on the field beside me isn't quite ready yet, the grains in the wheat ear are still soft.

Thank you for comments about herbs on Tuesday and finances on Wednesday.


Posted by Sue in Suffolk at 06:00
Email ThisBlogThis!Share to TwitterShare to FacebookShare to Pinterest
Labels: Folklore, Lammas