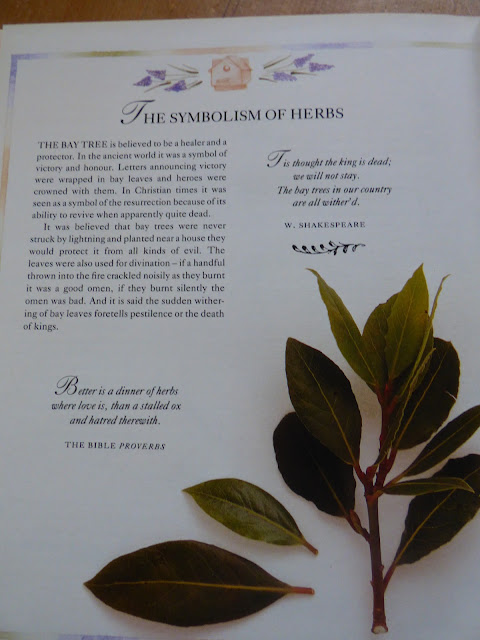 The Romans brought the Sweet Bay......Laurus Nobilis........Noble Laurel to Britain. Leaves from the Bay had traditionally been made into wreaths and given to successful warriors and worn as a symbol of high achievement. The Romans had borrowed this idea from the ancient Greeks who awarded their poets and artists with a similar wreath.

The Romans called the Bay 'the plant of the good angels' and it was thought to give protection against lightening, storms, witchcraft, snakebite and disease and  a Bay tree planted by the house door would keep away the plague. Shepherds would always wear a sprig of Bay in their hats in case of being caught out on the open meadows during a thunderstorm.
It was used as a decoration for the Roman feast of Saturnalia and brought into the house at Christmas when Christianity arrived along with holly, ivy and mistletoe. 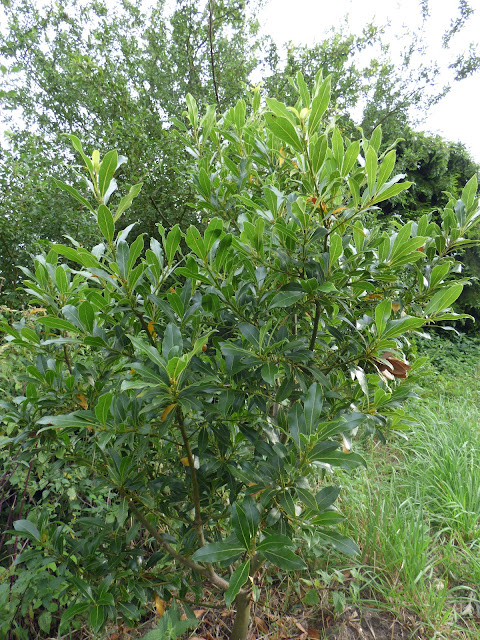 My first Bay tree was taken to the smallholding in a pot in 1992. We planted it in the centre of a big triangular herb garden and it grew and grew until it was blocking all the light from the kitchen and taking all the moisture from the herb garden. Colin cut it back several times but in the end we took it right out. By then it had produced seedlings all over the place which I would dig up and grow on to sell, I also had some success with cuttings from it to pot up and sell.

I kept one of the seedlings to take when we left the smallholding and it stayed in a pot for the year in Ipswich. When we got here I planted it on the edge of a ditch in a spot where it wouldn't matter how big it got and actually the bigger the better to keep some of the wind off the house. Because of last years dry summer it's taken a while to get going but it's nearly as tall as me now.
Which means it will be too big to move whenever I decide this place is too remote and too big. And that's why I picked up a small Bay at a boot sale a few weeks ago. 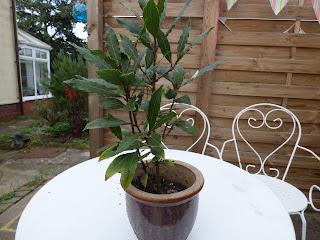 I don't get to use it as much as in the past but I still wouldn't want to be without one in the garden somewhere.

Back Tomorrow
Sue
Posted by Sue in Suffolk at 07:46
Email ThisBlogThis!Share to TwitterShare to FacebookShare to Pinterest
Labels: Bay Tree