What's Happening in the Garden and Greenhouse

The seed I bought especially to give me mini sweet-corn cobs for stir-frying produced plants that look really healthy, in fact over 6 feet tall but I was hoping for more than a half-a-dozen cobs from all the plants! maybe they are just a bit slow. 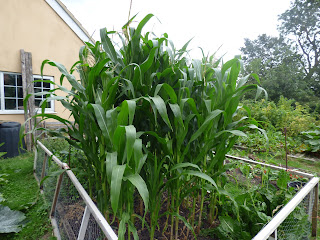 The wind on Saturday caught the runner bean tripods, blew them over and broke some canes so I had to lean them against the French bean tripods, when I next looked they had gone over again and pulled the plants right out of the ground - so that's the end of the runner beans - Bother! This tripod is on top of what's left of the potatoes still to dig up, I cut the tops off a while ago. 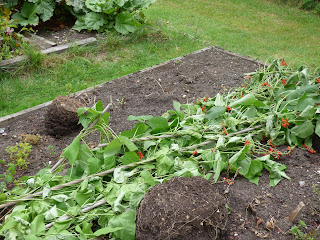 (The strange heaps you can see are the soil that was in the aubergine pots. I cut off the plants and add to the compost bin and then empty  all the soil and roots out onto a bed and over winter they break down so that in the spring all I have to do is rake it over the bed.)

The Potatoes have been damaged so much by ants, I dug up 5 roots and only a handful were OK and nearly a bucket full were useless which is even worse than last year. I'm not sure about bothering with growing them next year.

My beetroot are Extremely Small. I was hoping for enough to use some to make the beetroot chutney which I made last year for the hampers as sister-in-law said she loved it . I think Col's brother might have a few spare if I ask him nicely, he is able to do lots of watering with a hose as he's not on a meter and has good water pressure..........unlike here.

The row of onions from the sets my sister gave me are all up and drying. They will last me a while. Leeks look OK, courgettes still going strong and the butternut squash are very late and slow growing, I might get half a dozen if I'm lucky.

In the greenhouse tomatoes and peppers are still doing well, but the cucumbers and aubergines are almost finished. Just one aubergine plant left. The cucumber plants all got the "whatever it is" that makes the leaves go yellow and dry, mosaic virus or a critter? so are gradually dying, one more cucumber probably. 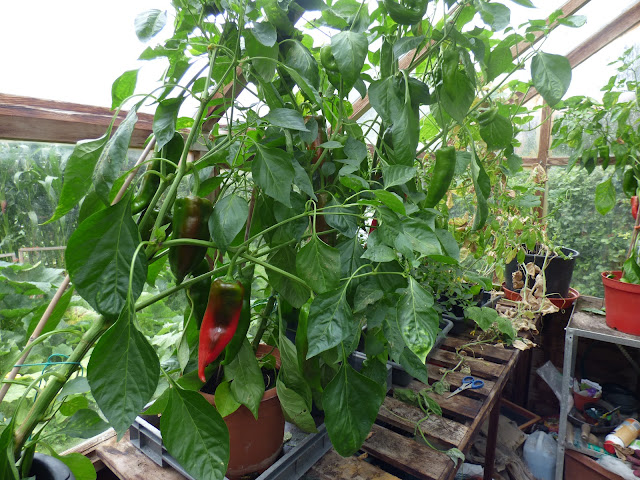 Failures never put me off growing - I just have another go next year!

I've now used some of the red peppers and lots of my Big Mama tomatoes to make the Red Relish, some will be for the Christmas Hampers.

4lb Large plum (Big Mama or Andine) tomatoes, skinned and rough chopped.
2 or 3   Large red peppers, finely chopped
1lb Red onions chopped small
1 - 5 red chillies (depending how hot you want it. I used two this year.) de-seeded and finely chopped ( Wear rubber gloves!)
2lb Gran sugar
1 tsp each salt,ground ginger, allspice.
1 pint Red Wine or White vinegar.
( For the best colour this really does need the red onions and red wine/white vinegar, and it doesn't work very well with normal tomatoes which have too many seeds and are more watery)
Put everything except the vinegar into a pan.
Stir over low heat until sugar is dissolved
Bring to boil and cook gently for approx 1 hour until thick
Add the vinegar and cook for 30- 50 minutes until thick again.
Put into hot sterilised jars, cover, seal and label 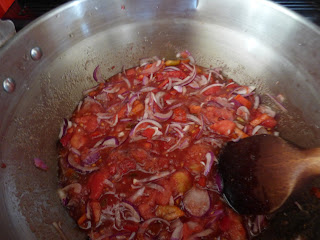 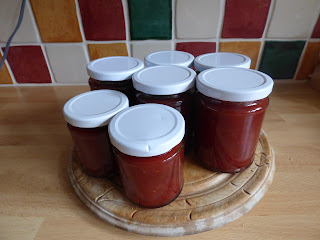