The next but one village from me had a Church Fete on Saturday afternoon, thought I'd better go and look, especially as the poster said they'd got a book stall. It's the village where I go to Big WI (although  I'll need to rejoin, but as yet they still have no plans to restart proper meetings).

Everyone looked so happy to be out and about and even the weather co-operated. The fete was held on the front lawn of The Grade II*  Manor, which for many years was a Christian Rest Home for the elderly.

Col's Mum worked in the kitchen there for many years. Now it's a huge private home (quite big for 2 people!). Nice to see the front lawn being used again - it was a bowling green in the 70's when I first became a Cub Scout Leader in the village.

There were one or two people there that I knew and I found a couple of books. 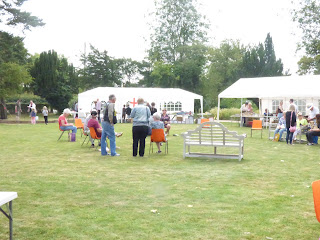 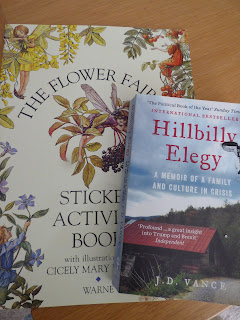 Everyone said how wonderful it was to do something so normal again.

Olympics.........So far I've watched the last part of the men's cycling road race - (They looked so exhausted), the last bit of the women's ditto, one match of GB men's hockey, some more GB women's football, a bit of gymnastics, a couple of Taekwondo bouts with a Silver medal winner......and some swimming.

Apart from Olympics there is also cricket on TV which Col would have enjoyed. It's a new type of match of 100 balls for each team, haven't quite worked out the whys and wherefores except that it's city based and everyone looks as if they are enjoying it.

Posted by Sue in Suffolk at 06:00
Email ThisBlogThis!Share to TwitterShare to FacebookShare to Pinterest
Labels: Local Events, Summer of Sport 2021