Notes from the week..............
An accident waiting to happen - but thankfully it didn't. I could hear several car horns hooting as I approached a big Ipswich roundabout that has two lines of traffic on each road, and wondered why. When I got to the junction I could see why .........an elderly lady in a small car going THE WRONG WAY round the roundabout. Luckily she'd been noticed and everyone had come to a halt to let her get out of the way. She turned into the retail park that I was coming out of. ..........when you stop and think about it - it could have been really nasty.
Almost as frightening as the time I was waiting at the railway gates right by the station in Saxmundham and watched horrified as a woman climbed over the gates to cross the track to get to the other station platform almost in front of the train coming in. The train hooted loudly too! The thought of what I almost witnessed haunted me for days.
Flowers on the table this week have been some more (whoops out of focus) roses 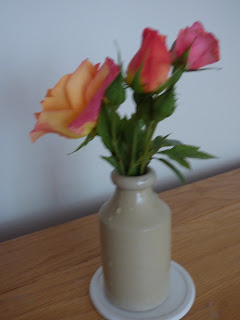 As it was too wet last Saturday for the first Saturday car-boot sale I decided to visit the first Wednesday one instead. Not many there as rain was threatening but several of the really good plant stalls were there, I looked at and coveted lots of things but this time just bought a Fern which will be a replacement for the Heebie-Geebie that's under the trees in the corner. The only other thing bought was a big bunch of small beetroot for £1. 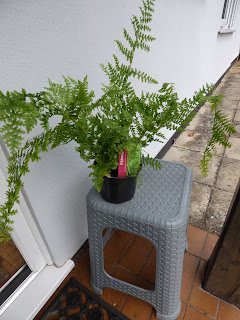 On my way home from a visit to a Suffolk Church (post about that sometime next week) I sneaked into this garden while the owner was away and picked the last of their strawberries and a cucumber from the greenhouse. It was OK..................I had permission! More Hollyhocks have appeared in BiL's garden than ever before - and none have rust. I have Hollyhock envy! 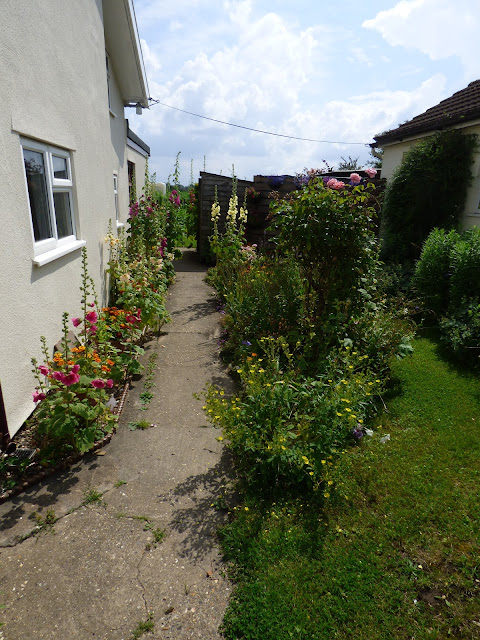 There are dozens of cucumbers beginning to appear in his greenhouse. We all clubbed together to buy the greenhouse for Col's Mum and Dad many years ago and it's still going strong long after they've both passed away. 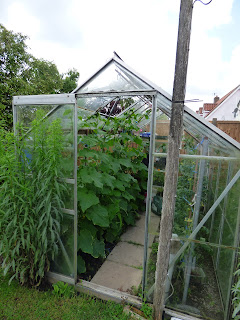 BiL's potato plants are SO tall but when he tried a root he said there were only very small potatoes underground. They seem to have put all their energy into their tops. 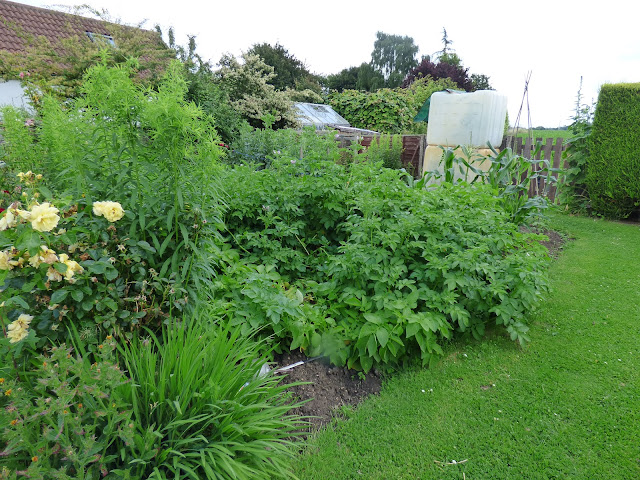 This week I'm grateful for
Hope you all have a good weekend whatever your plans. Don't think I shall go far.  I'm not too bothered about watching the Ladies finals at Wimbledon today but will settle down to watch the Men's finals tomorrow and of course THAT football match, which I will watch from behind a cushion!
Back Monday
Sue
Posted by Sue in Suffolk at 06:42
Email ThisBlogThis!Share to TwitterShare to FacebookShare to Pinterest
Labels: Being Grateful, Family, Flowers on the Table, The Garden