Pots for the Plant Stand

Why did I leave some old clay pots at the cottage?

Because I couldn't imagine why I'd need them?
Because  I was already  taking so many things with me?
Because  it's not easy sorting everything out by yourself?
All those reasons and now of course I know I should have brought them with me. - Stupid woman!
Oh well, too late - time to search for some............... not new off the internet or from a garden centre - that's too easy.
And sometimes you strike lucky..........first from a charity shop in Diss - £1.75 each
2 bowl shaped clay pots........... one had a hole in the other didn't and it took me an age to drill the tiniest of holes in the base, think I need a bigger masonry drill bit! 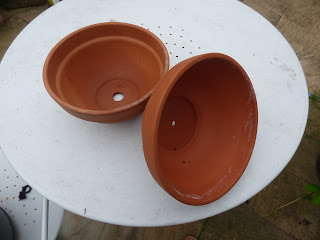 On Monday after the dentists (((shudder))) I went into Ipswich town centre and landed on these in the BHF charity shop
Total of  £6.47 including the little saucers 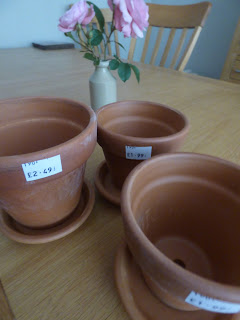 I've painted the plant stand - slate grey - and potted the two small cacti into the smaller clay pots,  just need to decide what to put in the other pots and keep searching for more. 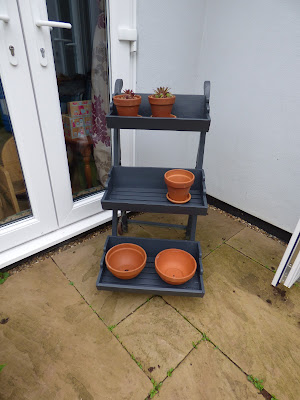 Haven't done a Summer of Sport update for a few days..........yesterday I watched an hour of Le Tour before the men's quarter finals at Wimbledon. Then caught the highlights at 7pm.They really were up in the clouds at the top of the mountain. At Wimbledon  my new favourite player...... Denis Shapovalov  (wiki says born 15 April 1999 is a Canadian professional tennis player. Shapovalov is currently ranked in the top 15 in the world, and was the youngest to enter the top 30 since 2005) is through to the semi-finals as is Djokovic of course. But poor old Roger Federer is out beaten by a Polish guy who seemed to have come from nowhere - as I'd not seen him play at all in the last 10 days. Perhaps that will be RF's last match.
Then of course there was a Very Important football match.........again......... and they went and did it!! 55 years since England reached the final of a major tournament. Now they meet Italy in the Final of the European Cup on Sunday. Goodness Me!
Back Tomorrow
Sue
Posted by Sue in Suffolk at 07:00
Email ThisBlogThis!Share to TwitterShare to FacebookShare to Pinterest
Labels: Summer of Sport 2021, The Plant Stand