A Saturday and a last of the month round-up.

Once Upon a Time I used to do a round up of frugal things on the last of the month but as this month I paid for the concreting of the greenhouse base, the greenhouse itself and a whirly washing line and May and June were equally spendy there's not been much thrifty-ness for ages. Am I right in thinking prices of fruit and vegetables seem to be at a high - or is that just because I've got none of my own and I'm just not used to buying.
With my first proper State Pension going into the bank and HMRC now 'kindly' taxing my spouses pension, I now know what my monthly income is and hopefully I won't need to dip into the downsizing savings/kids inheritance quite as much as was needed in the last 3 years.
There should be much less spent in August as all I need to do here has been done for the moment. I also need to spend less to fund the second-hand book buying!!

Shopping in Asda in Stowmarket is now a frustrating business, they are still re-arranging and modernising the whole store so it's a muddle with lots of empty spaces (due to the delivery driver shortage I suppose) but my biggest gripe is the absence of manned (or woman-ed!) check-outs. They've cut down to just 3. The rest of the space has been taken by a bigger area for self-service checking out - one bit for trolleys and another for baskets as a staff member bossily told me when I entered the wrong bit - oh dear me! They've also got a huge bay of hand held self-scanner things  - no idea how they work. I guess you have to have a credit card registered before you can use one.

'Flowers on the Table' this week - although they are on the bookshelves for a change - are a mix of colour from the garden. Mostly Dahlias - gorgeous big orange and dark pink. 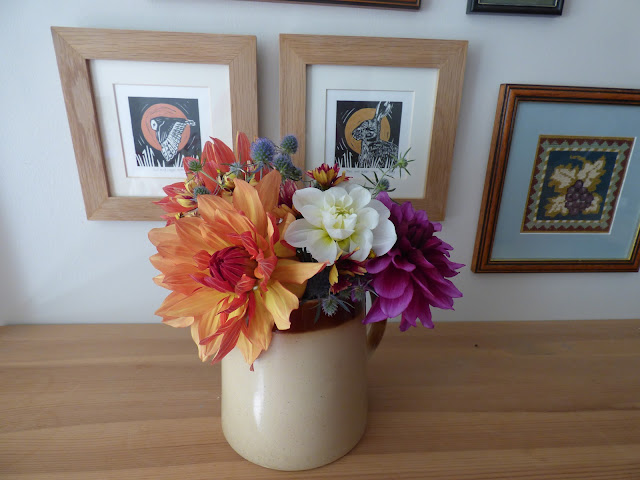 it's getting more and more exciting...as the athletics begins.
It was raining and dull yesterday morning(Storm Evert apparently) and I got up late for me, so by the time the TV went on GB had won loads-a-medals on Day 7. Duncan Scott in the swimming pool won his 3rd of the games. Then another Bronze in the pool. A medal for trampolining. Then 2 medals in the BMX .... A gold for Bethany and a Silver for Kye. The first sport I watched was the men's Kayak slalom but a mistake saw the GB man come 6th.
Much discussion today about the lack of medals for the Rowers after the last 3 Olympics when they won several. Lots of money thrown at the sport so there will be talk of them losing funding no doubt.Watched some hockey, football and on the track the 4 x 400m mixed relay. I think GB& NI ended the day with 24 medals.

I'm hoping for some help with getting the whirly washing line sorted this weekend. BiL will supply the tools and knowledge and son will provide the brute force to get the spike in the ground. (BiL is now waiting for all the hospital stuff connected with needing a stent - just like his brother in 2013, so is having to be a bit careful. I've re-assured him that Col was fine after having the stent and it had nothing to do with all the later illness)

Also hoping to get a car boot sale (or 2) this weekend - the weather has been dismal every boot sale morning so I've not bothered to go for ages..............well, just a week and a half but  seems ages to me!

Have a lovely weekend
Back Monday
Sue
Posted by Sue in Suffolk at 06:00
Email ThisBlogThis!Share to TwitterShare to FacebookShare to Pinterest
Labels: Being Grateful, Flowers on the Table, Summer of Sport 2021