...and so did the butterflies.

I knew it was a Buddleia  but didn't know what colour, so pleased to find it's a lovely dark purple. As soon as the flowers were out they were visited by butterflies - and this was only a day or so after commenting on Simon's blog (Careering through Nature) that I'd not seen many in the garden. 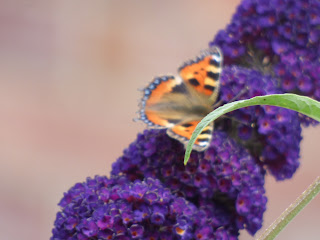 Red Admiral - this one is on the bag of compost that I'd laid on the veg bed, sunbathing on the warm plastic. Altogether there were 3 flitting about the bush 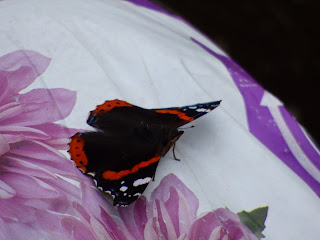 There were a couple of Peacock butterflies too but they were up so high I couldn't get a photo.

The weather men have been forecasting rain for days but it finally fell yesterday afternoon, came down in torrents just for a few minutes. I'm glad my bungalow is up well above the road level. 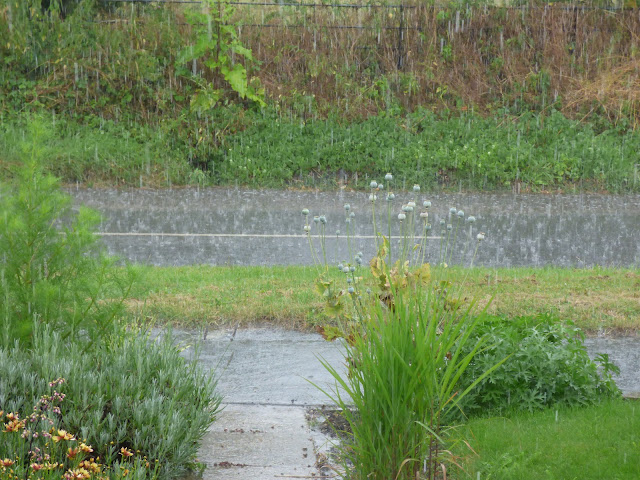 There was soon a small river flowing down the hill. 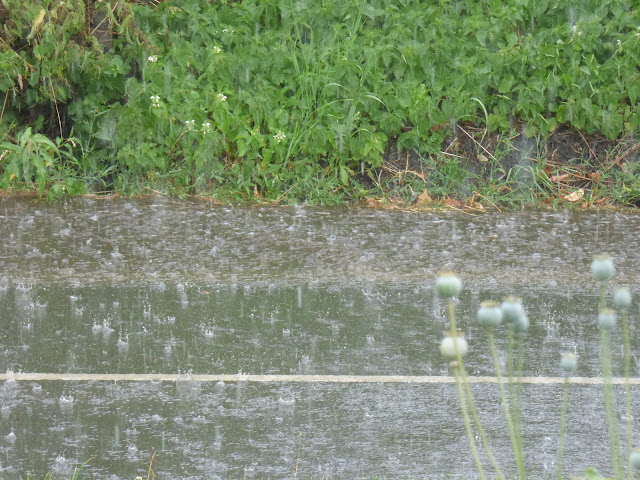 Woke up yesterday morning to hear there had been Silver medal in the women's triathlon (despite a flat tyre) to match the men's yesterday and a Gold AND Silver in the men's 200m Freestyle swimming, the race was shown later and they both came from behind to win......well done them! As some sports aren't being shown on BBC (lost the rights a few years ago - thanks to Dc at Frugal in Norfolk for that info) we seem to have seen more Taekwondo and it still looks a bit vicious to me but there was another Bronze Medal.
The women's team gymnastics came on TV and the electric went off! When it came back about an hour later I found that they'd won a Bronze medal - first time a GB woman's team had been on the podium since 1928 I think they said.............that's quite a while! Also another medal with the horses in the team dressage. One statistic that was amazing - a German lady won her 7th ......... 7TH! Olympic Gold medal in their team dressage.
My neighbour came home to find the electric off and knocked on my door to see if it was just them or a wider area. Luckily I was able to tell her about the UK Power Network Text Messaging service, where I'd already rang and found out that there were 400 homes off. I knew all about power being off and the Text message thing as at Clay Cottage the electric went off at least every few months. Here, if it goes off in winter I'll have no heat - that's when I'll miss the woodburner. I must get my gas camping stove back from BiL who borrowed it for an overnight trip to a stock car meeting. I've still got a wind-up radio and a re-chargeable lamp plus candles and a torch of course.

Going back to BBC losing the rights to show some sports at least they have Wimbledon for a few more years until 2027 but we won't see the French Open on terrestrial TV here any more as Eurosport - a 'paid for' channel now have exclusive rights. And I'm not sure that BBC will show any of the Olympics live in 2024 as Eurosport seem to have the rights for that too. It's all about the money.

Posted by Sue in Suffolk at 06:00
Email ThisBlogThis!Share to TwitterShare to FacebookShare to Pinterest
Labels: Butterflies, Natural world, Summer of Sport 2021, Weather