I fitted in quite a lot this week despite watching Wimbledon, the England match and catching bits of the Tour and an unexpected drive to Bury St Edmunds hospital to pick up BiL. He's had some tests for something that sounds just like the Angina that his Grandad and Colin had. He'll get another appointment for something, he's not sure what  as he's half deaf and said  he couldn't understand what the doctors said behind their masks!  Everyone has been telling him to get a hearing aid for years.

Monday saw me making a batch of Ricotta cheese again and it's certainly much easier than the Halloumi and more useful as I turned it into 6 portions of Ricotta, Spinach and Pine Nut Lasagna as  before. I've got to be more careful about batch making with no chest freezer as I'd also planned to make a pan of pizza topping this week but found there wouldn't be room for it once the lasagna was boxed and stored away.

I whipped through  this little book when I had no library books. It's about one of the families who took part in a TV series several years ago.

Thought it was about time I went swimming again, missed last week, can't remember why - how do weeks fly by so quickly............that's why I do a Saturday roundup of the week - to help me remember what's happened! Only two of us in the slow half of the pool - so a good swim.

Flowers on the table this week - more rosebuds from the garden - pink this time - and still no scent. 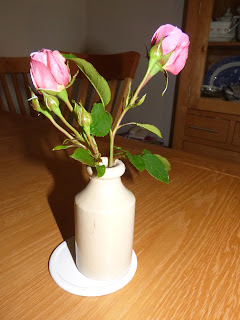 On Friday morning I popped over to the coast to see Youngest Daughter and Eldest Granddaughter. I got the hedge cutter back to use because the neighbours on my right told me the Yew Hedge is mine. They said previous owners of my bungalow planted it as soon as they moved in as there was nothing at the front marking the boundary between the two properties. I said "do you love it?" and they said no they didn't like it much at all. So they won't be bothered if it gets replaced sometime by something much more interesting and there are lots of things more interesting than a Yew hedge which just sits there looking big and green.

Summer of Sport update........oh dear, not such a good day in the Men's Singles at Wimbledon yesterday. Dan Evans out in 4 sets. But the young Canadian guy who beat Andy is awfully handsome (if I was 50 years younger!) and may well be one to follow in the future. I always think it's annoying that the Doubles matches only get mentioned in passing because there were 5 British men playing doubles yesterday who are through to the next round.
I missed most of Le Tour due to the above.
Then of course tonight there is a Very Important football match.

My plans to go to the re-opening of the Saturday car-boot sale (first since the world came to a halt ) at Needham Market  may get cancelled due to a grotty weather forecast. We shall see.

Hope you have a good weekend.

Posted by Sue in Suffolk at 08:00
Email ThisBlogThis!Share to TwitterShare to FacebookShare to Pinterest
Labels: Being Grateful, Cheese making, Flowers on the Table, Summer of Sport 2021