All Hallows Eve and Samhain

The Eve of All Saints Day or Halloween as it's more usually called is now associated with pumpkins, and dressing up but it is a day that has for centuries been shrouded in mysteries and superstition.
The Night of the Dead - the most unpredictable night of the year - when festivals from many cultures collide.

The traditional beliefs of  Halloween are connected with rituals performed for Samhain, the Celtic festival celebrated in Ireland and Scotland. Samhain was one of the four Celtic festivals known as quarter days. The meaning of the word in old Irish is 'summers end'. Celts considered sundown as the start of a day, which is why although Samhain is November 1st, it would have been celebrated at sundown on the 31st. It was their new year and fires would have been lit on the hilltops to drive out the evil of  the last year and welcome in the new. Later festivities would have been influenced by the Christian feasts of All Saints on the 1st and All Souls on November 2nd, when the dead are remembered in prayers.

For on Hallowmas Eve the Nighthag shall ride,
And all her nine-fold sweeping by her side
(Waverley by Sir Walter Scott published in 1814)

In the past it was a night for staying by the fire, out of harms way, and telling fortunes.
Fortune telling was done by throwing a hazelnut into the fire and seeing how it burned, or by peeling an apple and looking for the shape of the peel. These were ways of foretelling a birth or death in the family, the success of a marriage or the initials of a future husband.
In some parts of the country the 31st of October was known  as Mischief Night when mummers  would blacken their faces and knock on doors asking for cash. So although we think the trick or treat idea for Halloween came here from the USA, along with pumpkins, during the last 25 years, it's not completely  new............... before pumpkins,  faces would have been carved from swedes, turnips or mangle wurzels.

Years ago at the smallholding pumpkins were always one of the ways we made a bit of money through the  month of October when most other crops had finished. I searched the old blog and found the picture from 2014 - the year when we were given some seeds for giant pumpkins. We sold all these and also £75 worth of normal sized pumpkins. It was always hard work planting the small pumpkin plants out on the field in the late spring but a very useful income in late Autumn, as it is for many bigger farmers. 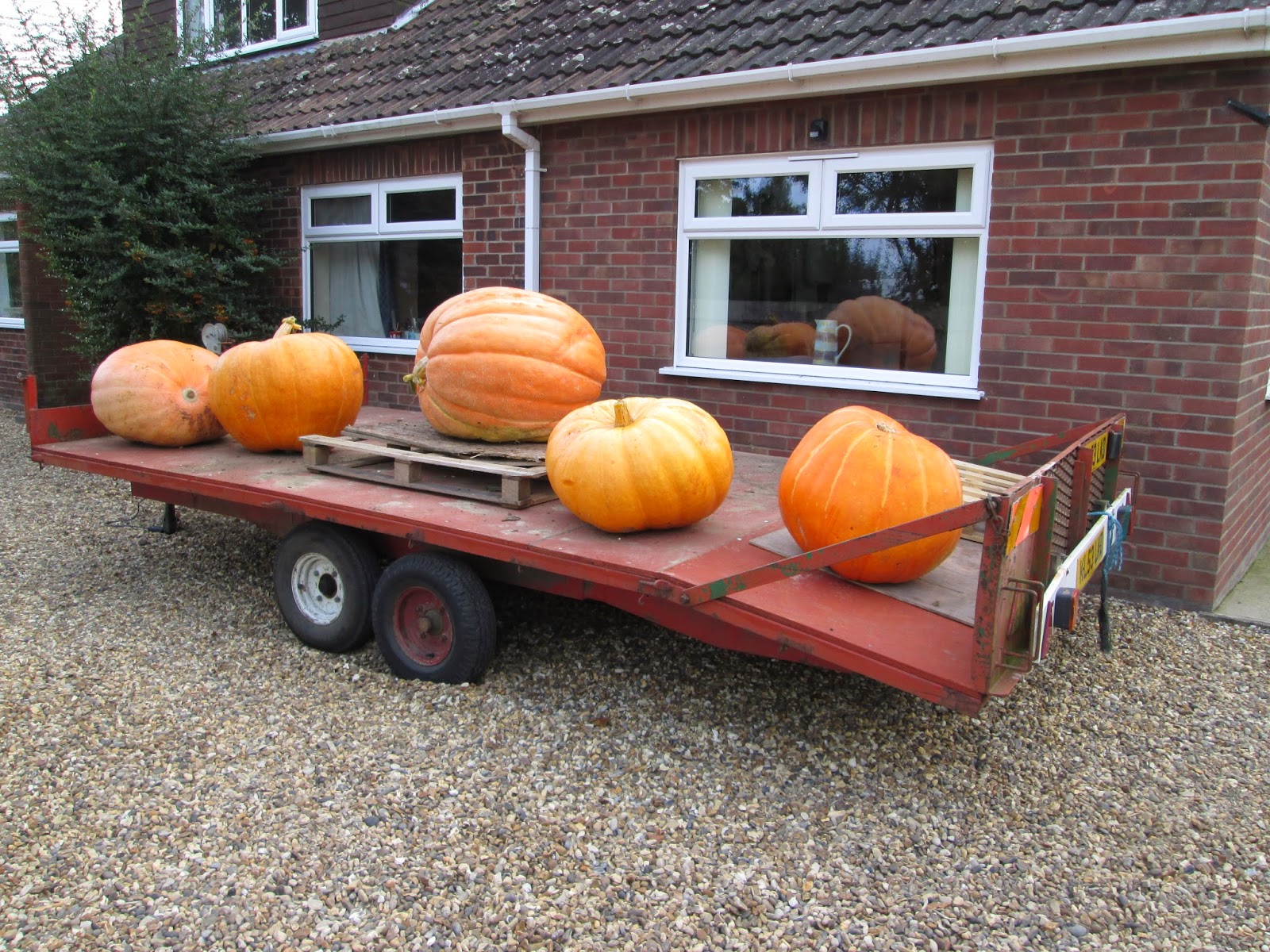 Posted by Sue in Suffolk at 06:00
Email ThisBlogThis!Share to TwitterShare to FacebookShare to Pinterest
Labels: Folklore, Halloween, Pumpkins, Samhain