I'll start with Apologies - this is a totally boring post for everyone other than a few people locally!

The village where I went to primary school isn't too far from where I live now and they have an enthusiastic local history group. Last year they did a display about the village school. This year the exhibition was called Wetherden folk. (We didn't actually live in the village but half a mile out in a hamlet of 14 houses, so didn't know many people in the village apart from those at school)

My photos of photos,  most from newspapers and already enlarged for the exhibition and taken on my phone are awful. I just snapped a few people I knew, people who were at school at the same time as I was.

The school was very small, two classrooms, two teachers -  so the picture below of the group who were 3 years older than me is the equivalent of a whole class = 1 girl and 6 boys. In my "year" there were 2 girls and 4 boys.

The first headmistress when I was there lived just along the road from the school and every lunchtime 3 pupils would walk to her house to take her dog out for a walk! One youngster - Me -  an 8 year old, One of 9 years old - a girl called Glynis and the girl in the photo below- also a Susan who would have been 10 or 11 were one group. I can't remember how many times we took the dog out but I think the head teacher retired soon afterwards so maybe not many.
Can you imagine that happening now? 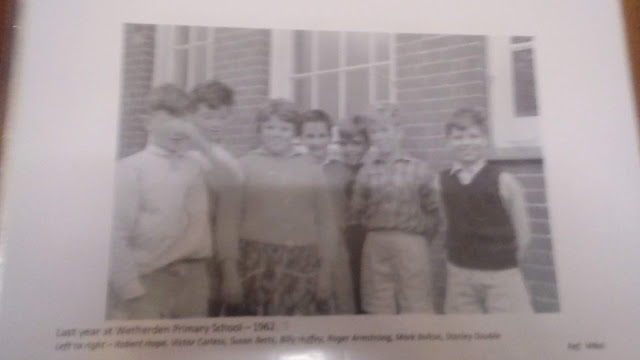 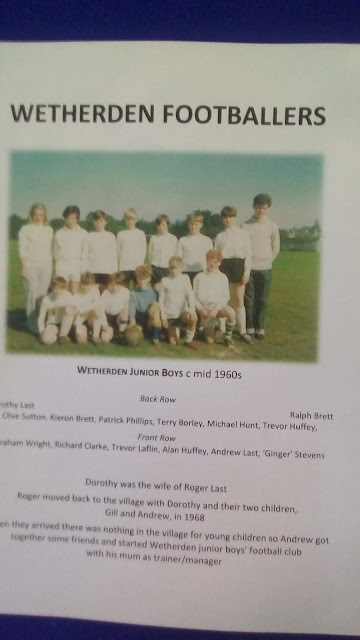 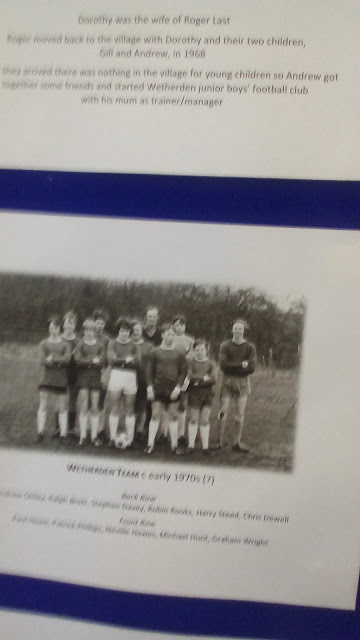 The footballers in the first photo are all younger than me but at primary school at the same time.

The second photo is a year or two later, some are younger than me and some a bit older and I need to contact the History Society because after coming home and pondering, I think (need to check) this isn't a group of Wetherden Footballers as such, but actually the Wetherden Baptist Chapel Youth group or FOY (Fellowship of Youth)  where I went to too. Our FOY leader was such an enthusiastic man he organised all sorts of things for us to do which often involved 6 or 7 of us squashing into his Morris Traveller (They were the cars that looked like a van with wood trim) and doing car treasure hunts or taking us to quizzes at other Baptist chapels. He would have helped with taking the football team to matches and I remember going to watch them play as  I was mad about one of these boys in the photo at the time............ although he wasn't keen on me!
Many, Many years later I ended up doing after school childminding for his 3 children - which is one of those strange coincidences that happen if you live in the same area for a while!

The final photo is our next door neighbour for all the years I lived at home and for many years before and afterwards too. She died at age 104. I spent a lot of time at her house and she would take us out for walks up the woods for primroses, hazel nuts and blackberries. ( Mum wasn't a walker - always too busy!) 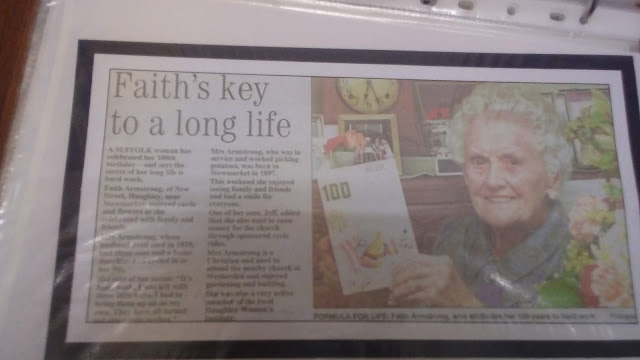 I think the local history group are doing a good job of collecting photos and information from the past and I love being back in the area so I can visit.


Back Tomorrow
Sue
Posted by Sue in Suffolk at 07:42
Email ThisBlogThis!Share to TwitterShare to FacebookShare to Pinterest
Labels: Local Events, Memories