Why, when there are beds and comfy chairs, has Polly decided to sleep on top of the printer, which is on a chest of drawers 4 foot off the ground? (I keep it covered with an old sheet to keep the dust out) Cats are so weird. 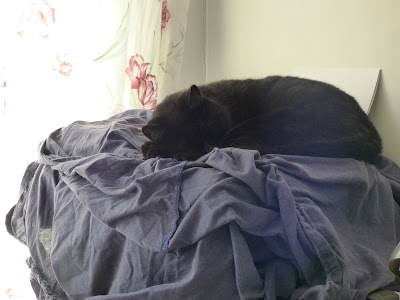 Watched a fascinating programme about building model railways - a competition for teams. Who knew how many model railway fanatics there are out there?  They were mostly men of course!

I shall never moan about Her Maj's Revenue and Customs again because they've just sent me a cheque for over £700 that Colin had overpaid in tax on his work pension in the year before he died. Col said he thought he was paying tax when he shouldn't be and I said it's OK we'll get a form and claim it back in the new tax year and then you know what happened in April and  May......... I never gave it another thought.

After watching a programme about the history of the Man Booker prize for fiction I know why I don't rush to read any books that win prizes - talk about a load of loveys!

Now that I've bought a re-chargable lantern I bet the electric doesn't go off at all this winter.

Library van due next week and I still have 5 books unread.

The Invictus Games are on TV tonight - they are so inspiring.

P.S Thank you for comments yesterday and hello to a new follower and goodbye to whoever un-followed!


Posted by Sue in Suffolk at 06:00
Email ThisBlogThis!Share to TwitterShare to FacebookShare to Pinterest
Labels: House and Home, Polly, TV