After the week of enforced rest due to the back ache I went out to the Saturday Car-Boot sale at Needham Market.

Found a nice Christmas present for Willow........... wooden play table with things fixed to it to fiddle with was £4.50.
Also bought a child's apron for 20p, another Shirley Hughes book for 50p. Christmas stencil cards for the 2020 advent parcels also 50p. 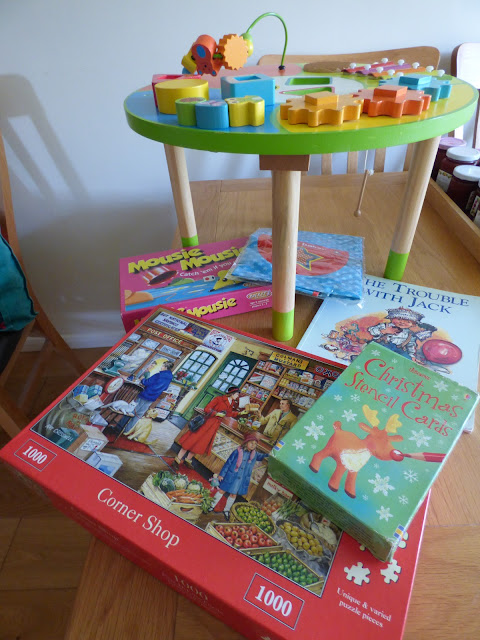 After lunch I nipped a few miles along the back roads to Eye for the only Jumble sale I've seen advertised this Autumn. I battled the crowds and spent................40p! The 1000 piece puzzle has no big areas of sky, cliffs and sea like my last puzzle but a mass of different things in an old fashioned corner shop, they only wanted 20p - bargain! Hope it's complete as when I got home and opened the box I found the bits weren't even in a bag so some may have fallen out. (For 20p it doesn't matter too much as they'll go on the fire for a bit of extra kindling!)
The other 20p went on the Mousie, Mousie game which I seem to remember my sister had? or was it one of the children? -so either 50+ or 30+ years ago!


I've nearly finished the lifeboat jigsaw. I've been making sure I sit properly on the chair while doing it as I think it was perching on the edge of a chair and leaning over that made my back go ping a week ago.
No pieces missing so far and only the cliffs left to do. The sea and the sky were were not too bad but the cliff might take a while. 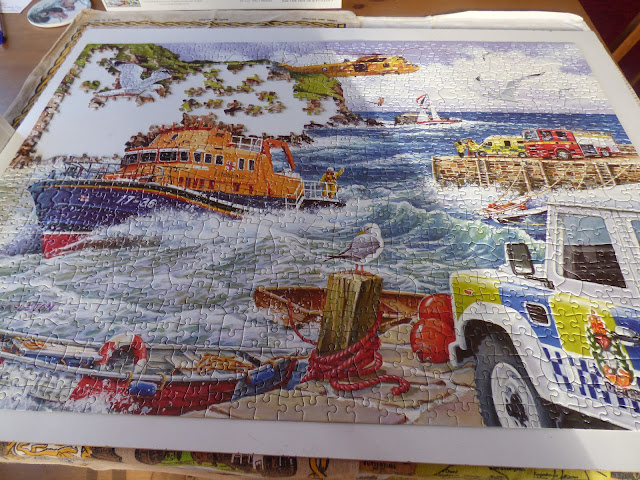