One Week into October and More Expense

Job Done......................
I got the paint out for the downstairs bathroom, didn't have to buy any - just  used what was left from doing my bedroom, it only took a couple of hours and looks tons better. I had to stick the skirting board on with gorilla glue and do lots of filling as there were gaps where either the wall or the skirting board weren't straight. Then painted skirting and door frame  and by the end of Monday that was another room finished. I'm pleased with what's been done here regarding bath and shower rooms, everything is much more sensible now.

Grrrrrrrr........twice..............
I wasted nearly 45 minutes of my life traveling 8 miles further on than the village with the swimming pool so as to visit a church, only to find it was locked, with a phone number to ring but as I wanted to get to the pool on time for the over 50's hour I couldn't stop to ring. Huntingfield church ....outside view only 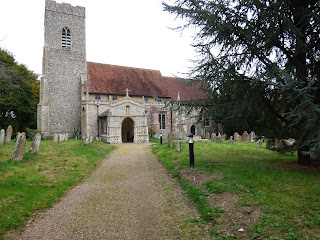 One of the villages I went through on the way home had a speed-camera  van half hidden in a gateway, I should have been going 30mph,  might have been going 34mph - Oh Dear. That might mean a fine and speed awareness course! Then I thought "Oh well - something else to write about on the blog!!" And if I do get a fine and have to do a course Col would have been livid as he was always moaning at me for letting my speed creep up over 30 through villages, just because  he spent 40+ years driving round Suffolk and never got caught for speeding once!

Yum................................
Monday night was the Birthday meal for big WI. (99 years) It was at a pub in Big WI village. I'd chosen a chicken something followed by Eton mess. I remembered why I don't like going out for meals with a huge group (over 30 of us)- too much sitting and waiting. Service was sooooooo  slow. Some people had starters so the rest of us had to wait even longer. There is a new chef at this pub apparently and the meal was all fancy.  What they call presentation I call faffing about! I'm not sure what the round potato thing was, sort of a cross between mash and roast. Presented with a few pea shoots and a piece of  chicken breast with something stuffed in it, then cut in half and stood on end. (can you tell I wasn't impressed? Although I will admit the chicken was very tender).
The Eton mess was delicious ........see empty plate! 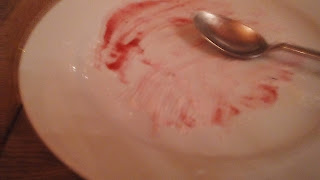 My back was very painful from 2½ hours very upright on a hard chair so I didn't stay for the coffee and  entertainment which was I think was two old blokes doing sea shanties! ( or something similar)

Going, going, gone..........................................
More things went out of the house this week - a small selection of my clothes that haven't been worn for about 5 years - most came from charity shops in the first place so have now gone back plus yet another bag of books that I've tried on ziffit several times but they've not wanted them. Also another small box that ziffit did want - just £9 worth but better than nothing. From the workshop two old wire brushes and a couple more random small bits went into the bin.
I also turned some more 3D decoupage sheets into birthday cards.

And the Expense?
Well, we knew some of the infrastructure here was a bid odd and Col said a few times that he thought the hot water system wasn't right and too complicated, and when it was repaired last year we were told that it was a set up that isn't used anymore. So when the pressure of hot water out of the taps got slower and slower over the last couple of months I knew something needed mending. In theory the company who did the shower and bath stuff ought to have been able to do the water but they didn't seem very keen and I wasn't keen on them doing more here anyway. So I rang the company who did solar thermal at the smallholding but they've stopped doing anything to do with thermal systems. But I did get a phone number of another specialised heating and plumbing company and the man came and looked and tutted - as they do - and told me the bad news which I was expecting. I need a whole new simpler hot water tank without the strange system which they no longer use which involves a coil thingy which is full of lime scale.
The quote arrived...................not cheap, but it has to be done.


I keep forgetting to say welcome to  new followers, number 422 and 423, hope you enjoy reading.

Have a lovely weekend everyone, weather forecast a bit iffy here

Apologies for not replying to any comments yesterday - ran out of time. I'll catch up with myself sometime!

Posted by Sue in Suffolk at 06:00
Email ThisBlogThis!Share to TwitterShare to FacebookShare to Pinterest
Labels: House and Home, My New Normal, WI