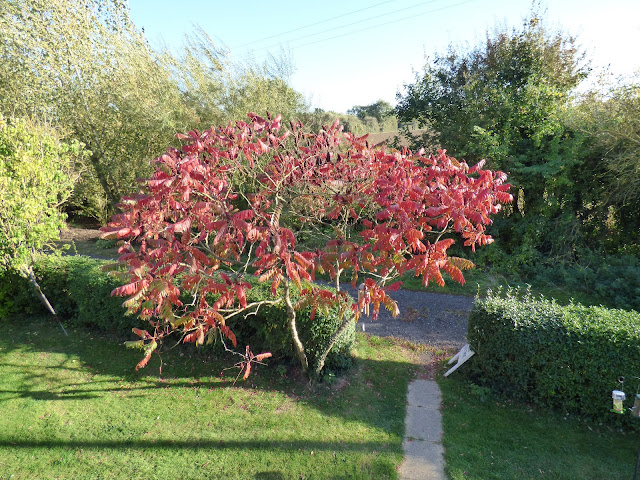 Vinegar Tree?
Well, that's what they were called when I was small. We had two or three in the bit of the garden that was grass for us to play on. The rest of the "garden" was a builders yard, usually filled with heaps of bricks and huge sand and ballast heaps -this was before the days of builders bags.
The vinegar trees back then were small with branches that arched down to the ground - we could get right underneath. I think this one out the front of the house is old and suffers from being too close to the hedge and lack of moisture.
Their proper name is Stag's Horn Sumach and it's a native of North America. The name comes from the fact that in winter, without leaves the thick twigs resemble the antlers of a stag. The sumach part of the name is thought to come from North American Native people and traditionally a kind of lemonade was made by soaking the fruit in water. 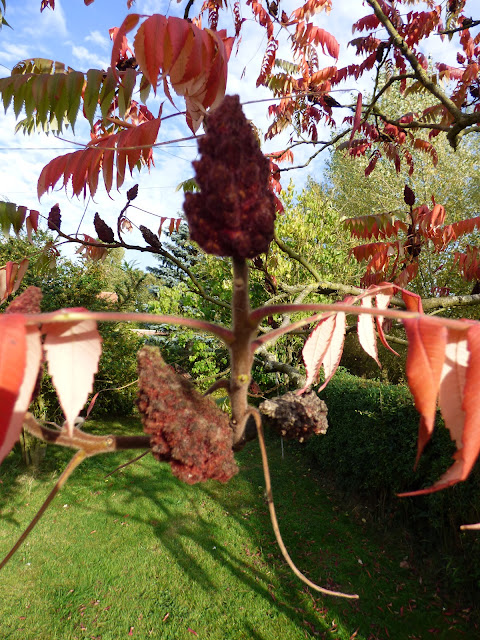 The fruits are also dried to form a red powder called sumac which is used in Lebanese and Turkish cooking adding the flavour of lemon juice which is an acid as is vinegar, so that must be why we always knew them as vinegar trees.
Beginning of autumn is the time to gather the fruit before winter rain washes away the flavour.

They are one of the few trees that go bright orange and red in the winter so have always been popular for gardens. It isn't  a favourite tree of mine except for this time of year for it's colour.

( The photos were taken last week; after the windy weekend the leaves are now all on the ground)

Thank you for the get better soon comments yesterday, I'm still hobbling!