When I told son and DIL that I'd bought a slightly tacky Christmas decoration and they would probably love it, they wondered what it was, and when I described it they said they'd bought something very similar from a car boot sale too - knew it would suit them!

Wouldn't have looked twice at this Christmas canvas picture if I'd seen it in a shop but it was at a Car-boot sale for £1 and the lady selling said it just needed batteries and I had a plan. 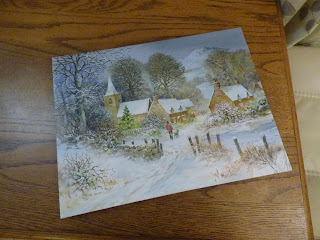 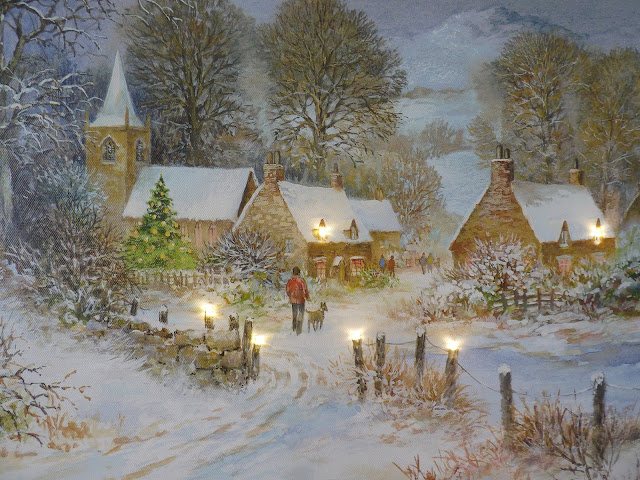 Then  loaded onto memory stick and took it into Boots, printed off a few which will be turned into Christmas cards next year. 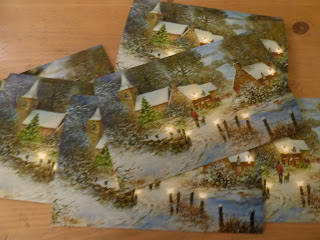 I might pass the picture to the charity shop  now I've got the photos or just keep it lit up on the shelf for Christmas or give it to son and DIL to start a collection..

Diary Notes
Sunday was a good morning in the kitchen (It's all very well gadding about taking photos for the blog and keeping busy but it doesn't leave time to do anything at home!)
I'd bought local bacon and chipolatas from the Co-op, so spent a while twisting all the chippos in half to make mini sausages and wrapping them all in a third of a slice of streaky bacon. Then I heated a bit of honey in the microwave,stirred in some whole grain mustard, left it to cool and spooned over the sausages and bacon in a oven tray. Popped the whole lot in a freezer bag and then into the freezer. One job done for Christmas day. Wondering if I should do another lot for the 3 vegetarians although veggie sausages and bacon always look pretty awful.
Next I mixed up some fruit cake mix for 3 mini cakes for the hampers. I like the idea I found for decorating them which involves tri-coloured glace cherries and pecan nuts.
And while the cakes were in the oven I also cooked some chicken thighs  for my lunches this week.
While they were cooking I made my favourite "make early and freeze" dessert. It a Chocolate Meringue Gateaux - suitable for vegetarians and gluten free but very, very bad for for people on diets! (the recipe's on the recipe page somewhere), I've got a medium sized Christmas pud in the cupboard, bought last year and unused but still in date so that's dessert for Christmas Day sorted.
Finally I did the tomato, garlic and ginger soup that I was asking about (Jack Munro's Hot Nurse ). I keep waking up snuffly and thinking it's a cold coming, so far it hasn't come to anything but I'm hoping the soup will stop it in it's tracks.
(Tried the soup...........think I over did the ginger! ..........Phew)

Another book read in December thank goodness. Nicola Ford - The Hidden Bones. First novel by this author, who is an archaeologist  and the story is set around a Dig, missing finds, murder and secrets hidden for 40 years.She has a follow up due in May, I shall make a note to check the library.

Keep forgetting to welcome new followers as I see numbers have crept up to 444. Hello and hope you enjoy reading. Do leave a comment - sometimes I get time to reply and other days I don't so apologies for those days in advance!

Posted by Sue in Suffolk at 06:00
Email ThisBlogThis!Share to TwitterShare to FacebookShare to Pinterest
Labels: Advent Photos 2018, Card Making