(from The Months by Sara Coleridge)

December was originally the 10th month and takes it's name from the Latin decem meaning ten. The Anglo Saxons called it Wintermonarth and then after their conversion to Christianity Halighmonarth meaning Holy month 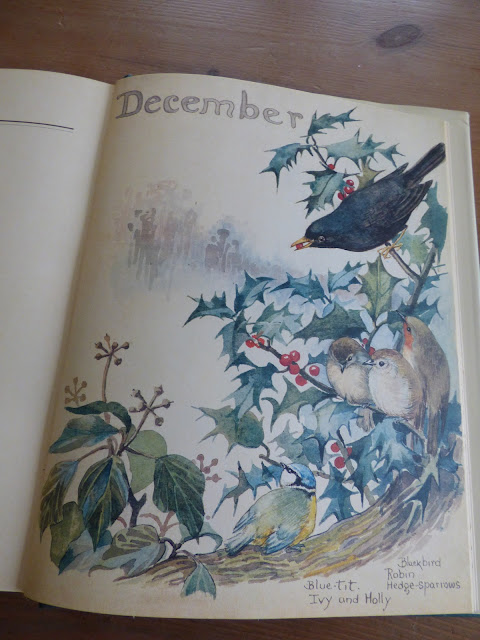 (Very unlikely to see all these birds sitting together on one branch so lots of artistic licence used here!)

During December day length deceases by 22 minutes, down to 7 hours and 49 minutes on the 21st and throughout history the countries in the Northern Hemisphere have found ways to cheer up the darkest time of year, the shortest day, the winter solstice. In Northern Europe the midwinter festival was called Jol or Yule and  fires were lit to symbolise the heat, light and life giving properties of the sun  to persuade the Gods to return the daylight.

To early Christians this would have been seen as the ideal time to celebrate the birth of Christ as it was already a Roman holiday, the great festival of Saturnalia when gifts were exchanged. The month became Advent (from the Latin word for 'coming') and Advent Candles are often lit in churches on the four Sundays before Christmas. The word Christmas first appeared in Early English in the C11 as Cristes Maesse - the mass for the birth of Christ and was originally celebrated on different days in different countries but eventually most agreed on December 25th.

The tradition of bringing greenery into the home for the Christmas season dates back to pagan times when each had a meaning. Holly was a symbol of everlasting life and fertility. Ivy was an anti-witching plant with medicinal values, Rosemary was holy and magical and Bay was once sacred to Apollo and to Aescutapious,the god of medicine. Mistletoe was also associated with fertility and used by the Druids for ceremonies.

There are not many weather sayings for December

Rain on the first Sunday before Mass, rain for the week

There are a few sayings for Christmas Day

If the sun shines through the apple tree on Christmas Day, there will be an abundant crop in the following year

Meadows at Christmas green, at Easter will be frost

As usual I will be doing  Christmas or Winter themed posts all through Advent.

Back Tomorrow
Sue
Posted by Sue in Suffolk at 06:00
Email ThisBlogThis!Share to TwitterShare to FacebookShare to Pinterest
Labels: Advent Photos 2018, Folklore