December 3rd and The Cup and The Mantel

At the beginning of December every year I get the Christmas cup and saucer out of the cupboard. It came from a charity shop umpteen years ago and was meant to be a present but I didn't want to give it away. I shall have to pass it on one day because the darn thing is so heavy when full I can hardly lift it.

Autumn has been packed into a box and the Mantel shelf has been decked for December and Christmas. 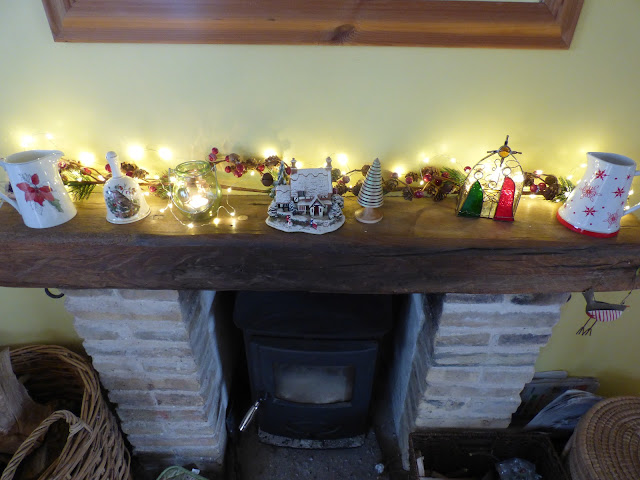 My weekend diary
It was  Christmas Bazaar day on Saturday. One at the church in Son's village  where I had my first mince pie of the season and  spent £1 trying to win a decoration and the second was for Debenham Church where I bought 2 books (50p each) without putting my glasses on. When I got home and put  on the glasses I found one book wasn't at all what I thought it was, so looked on Ziffit and they were offering over £3 for it! It didn't take long to go through some of my other books and then the CDs until there were enough for a small box full to send off.

Then Kevin Costner made me miss the first half hour of Strictly on Saturday night when I found a fairly recent film of his on BBC2. From 2015 'McFarland,USA' is a Disney sports film based on a real life event. Kevin Costner has done lots of sport films - but now he is older he's the coach rather than the player! The best bit of this film for me was at the end where they showed the real life boys - now as grown men - and what had happened to them between 1987 when the film was set and 2015.
The film is typical Disney - happy ending - but I was just watching to see Mr Costner and how he'd aged - he's the same age as me - but doesn't look it!

On Sunday I delivered the  Christmas present to my Brother in Law, he was quite disappointed that I hadn't wrapped it, right ready for him to give back to me  on Christmas Day! He gave me the money for the present - this works well! Now He needs to think of something for me to give him for Christmas.........and soon.

I spent Sunday afternoon and evening reading, I'm way behind ........so many library books still to read.

Sue
Posted by Sue in Suffolk at 06:00
Email ThisBlogThis!Share to TwitterShare to FacebookShare to Pinterest
Labels: Advent Photos 2018