December 13th and the Radio Times

One tradition that carries on regardless of Brexit, political shenanigans and everything else happening in the world is the Christmas Double Edition of the Radio Times!

When is the Christmas Radio Times out this year?

There are actually a couple of release dates for the Christmas Radio Times this year, with London and the south east getting the issue early, on Saturday 8 December.
The rest of the country will be able to get their hands on a copy on Tuesday 11 December.
The cover of the issue is a closely guarded secret by the Radio Times, so we don’t know who or what will have the honour this year just yet.

WHY? does London and the South East get it earlier than everywhere else .......Harumph!


There's a website with all the Double Issue Christmas Covers going back to 1969, it didn't like me copying them very much so it's HERE if you want to look

This is more dated - pre 1969, when cigars and cigarettes were often given as Christmas presents!

Much better than recent years when it's just been Raymond Briggs's Snowman or Father Christmas - a bit of a cop out I reckon, doesn't take much designing to copy things from books! 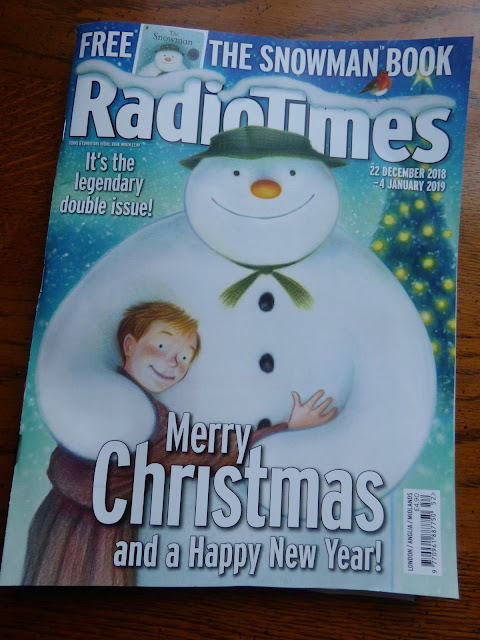 The price of the double issue has jumped up to £4.90 and the  free Snowman book is available only from Rymans which would mean a trip to Ipswich, with diesel and parking charges it's probably cheaper to find a copy from a charity shop!

Many thanks for comments yesterday, sorry I didn't get to reply to later ones.

Posted by Sue in Suffolk at 07:00
Email ThisBlogThis!Share to TwitterShare to FacebookShare to Pinterest
Labels: Advent Photos 2018