December 8th and How I Shocked My Children

Last week when Eldest daughter rang and asked how I was getting on with the Christmas preparations  I was able to tell her the tree was up and  decorated, I'm sure she dropped the phone in shock! Got the same reaction from son and DIL - they are the biggest fans of Christmas (even their wedding 2 years ago was Christmas themed) usually  getting their tree up early but I beat them by two weeks.
In the past the tree was always fixed together (or brought indoors when we had a live one from the smallholding) and decorated on the weekend before Christmas. This year it was done much earlier.

The reason? well, I was crawling into the half height cupboard under the stairs to get out some plastic boxes to store all the food and other stuff from the cupboards  while THAT man was doing the kitchen. And there at the back was the tree in it's box, so I thought it might as well come out while I was there. It hasn't been out of the box since 2015 so it deserved to be freed from captivity and anyway youngest daughter was visiting with Florence and I thought she would help put some of the decorations on it.

I'm glad I got the box of new lights, it looks so much better well lit, they are the only thing bought new this year and in true Frugal Sue fashion all the hanging decorations are from boot sales, charity shops, charity Christmas fairs or hand made. 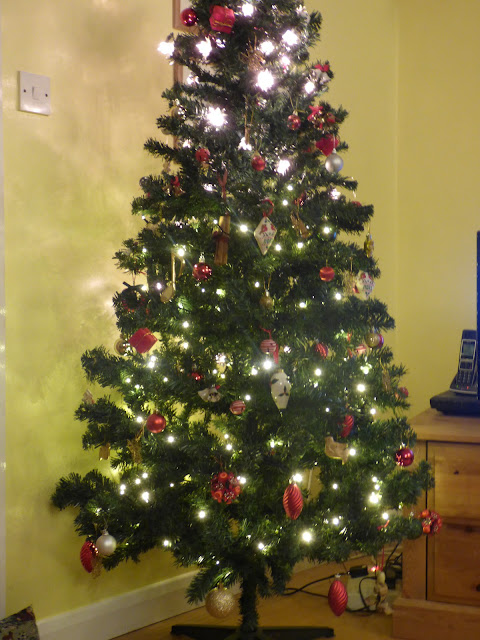 PS - Does anyone know who had a recipe for a soup that protects against catching a cold? Think it was heavy on the garlic.
( Edited in to say........ Thank you to my PP friend S who emailed all the way from Portugal to give me the answer and to Gwen below how also knew where to find the recipe)

Posted by Sue in Suffolk at 07:59
Email ThisBlogThis!Share to TwitterShare to FacebookShare to Pinterest
Labels: Advent Photos 2018, Thrifty Lifestyle