5p pieces get stuck in the corner of my purse, so for the last few years I've been taking them out and popping in a money box. I also chuck in any 10p's if there are more than one in my purse and some pennies and twopences go into another tin too.
Sometime in December when I know I'm going to be visiting the bank I tip the whole lot out, bag them up, pay them in and use that amount of money to get something for Christmas. (When we were selling stuff at the gate on the smallholding I got a lot more 5p's than I do now! ........it used to be enough for the Christmas Ham and the Turkey).
This year there were enough 5p's to fill a £5 bank bag  almost enough 10p's for another £5 bag and one pounds  worth of pennies 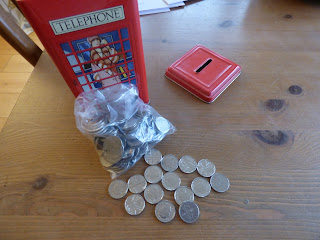 £11 was enough for a good sized bit of smoked Gammon to pop in the freezer ready for cooking on Christmas eve.


Diary Notes from the week so far

Today's post should have been about the WI speaker who was supposed to be coming to talk about the 'Tradition of the Christmas Goose and other Christmas food'.
But she cancelled and we entertained ourselves with some paper folding to make a star -(as seen in WI Life magazine) It's very strange that 3 speakers have cancelled this year at Big WI - or in the case of one - just not turned up - quite disappointing and 1 cancelled at small WI too. Of course there is usually a genuine good reason - illness or similar but it's a bit annoying because WI isn't cheap to belong to and I really like a meeting with a speaker  - always different and usually interesting.

At last I can add a  book to the books read page after  racing through "Shadow over the Fens" by Joy Ellis. Another good crime story featuring DI Nikki Galena and DS Joseph Easter, the second in a series and published back in 2011 and I'm still puzzling at how I'd not come across this author before - but better late than never. I've got the next 2 on order from the library.

I'm enjoying the charity shop except for one thing............the overwhelming chaos and muddle upstairs! People are bringing in tons of stuff and there isn't enough volunteers to sort it. Then every week someone brings more stuff from the other charity shop in Eye because its so teeny and they've been storing everything for our new shop. So all in all chaos! with no idea where to start sorting but as I've now got the workings of the till sorted (mostly!) the manager lady left me downstairs while she made a start upstairs. She spends quite a lot of hours a week on her own in the shop at the moment so never gets time to sort things out.

And the best news HE'S GONE, FINISHED, I never have to have him in the house again....... The kitchen man is who I'm talking about!
I'm going on a small........ actually a BIG rant here to explain how close I got to screaming!

I have been driven to complete madness, by his faffing about, worrying over nothing, preciseness and losing things! He has been doing all the cutting of the worktops, plinths, skirting board etc etc in the workshop which is about 50 metres from the house and I reckon he must have gone back and forwards about 50 times every day.
He worried about anyone he saw walking down the footpath and started locking and unlocking the workshop door each time he went in and out until I said "for goodness sake just put the key on the inside of the door and shut it, then it looks locked anyway".
He worried one day when he saw someone walking dogs across the field in the distance - he thought they could be hare coursing! I said they were probably just walking their dogs along the footpath that crosses the field.
He worried every time a van drove up the lane turned round and went back again - usually they are delivering something to one of the other houses or to me and it's the easiest place to turn round - he thought they were "Looking for something to steal".
He was constantly losing things and having to turn out his van and toolboxes to find whatever.
When I said I didn't want some tiles regrouted he said he had his reputation to consider! Gawd know why as I'm certainly not going to recommended him!
I've had the kettle at the other end of the kitchen while he's been working where it usually is and he said I should leave it where it was and move all the cups; coffee etc to a different cupboard - Er NO!
He almost had heart failure when he discovered the existing wall tiles in one place were not level, which meant there would be a slightly bigger gap between tiles and worktop at one end. I said it wouldn't matter as that was were the toaster stands but he kept on about it for days.
Everything is double, treble fixed and I feel sorry for whoever takes out these units sometime in the future - For instance a piece of skirting board which was fixed with 3 screws is now fixed with 8!
He was disgusted at the poor workmanship of what was there already which was nothing to do with me!
He kept hinting at how many things he would like from the workshop when I clear it out - Sod That! there are several family members who will get first dibs on Col's tools and workshop stuff when I clear out in the spring.


Phew ........apologies for that - good to get it off my chest! Although I've already ranted about him to everyone I've spoken to recently. He will never be mentioned again


The  plus side is that the  kitchen does look very good, the lighter units and smooth wood effect worktops have made the room look much bigger. Now I just have to put everything back in the new cupboards......... pay the other half of the bill..........and get on with some Christmas baking.

Many thanks for comments yesterday and sorry to everyone who got "God Rest You Merry gentlemen" stuck in their heads for the rest of the day!

Posted by Sue in Suffolk at 06:00
Email ThisBlogThis!Share to TwitterShare to FacebookShare to Pinterest
Labels: Advent Photos 2018, Thrifty Lifestyle