Last week I looked through my Flower Fairy books to find the Snowdrop Fairy picture for the post about Snowdrops but I didn't have the right book and ended up finding a picture online. I looked on Amazon and put in "Flower Fairy Books" and the ones that popped up were really silly prices. So that was the end of that idea.
During the week I popped in some charity shops and spotted this on the shelf for £1.50 ...........and  I wasn't even looking for it. 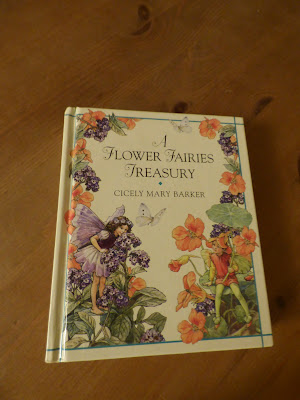 Thought I would find out more about Cicely Mary Barker. She was born in 1895 and  as a frail child was taught at home and using correspondence courses in Art and Drawing taught herself to draw and paint and then went to the Croyden School of Art. She said her influences were Kate Greenaway and the Pre-Raphaelites. In 1911 she sold four drawings which were turned into postcards and then in 1923 Flower Fairies of the Spring was published.

In 1924, with her parents and sister, the family moved house and Cecily had a studio built in the garden and her sister conducted a kindergarten in a room at the back of the house. The family lived frugally and were devout Christians.

In an interview in 1958, Barker said, "My sister ran a kindergarten and I used to borrow her students for models." She also painted the children of relatives. The plants were painted from life, and if a specimen was not readily at hand, Kew Gardens staff would provide her the specimens she needed. Cecily designed and made the Flower Fairy costumes, and based each on the flowers and leaves of the particular plant to be illustrated. She used books on English costumes for reference too.The costumes were kept in a trunk in her studio along with wings made of twigs and gauze. Each was broken down after an illustration was completed and the parts recycled for other costumes.

Flower Fairies of the Summer was published in 1925 and Of the Autumn in 1926. Flower Fairies of the Seasons was published in 1930 and The Flower Fairy Alphabet in 1934. Flower Fairies of the winter wasn't published until 1985, twelve years after she died in 1973. There are also other Flower Fairy books listed.....Of The Wayside, Of the Trees and Of the Garden.
She also did several religious themed books and pictures and designed a stained glass window for her church.
There are 120 different Fairies  in  The Treasury but it doesn't include some of the flowers and trees that are in my smaller books and according to a dedicated website there were 170 illustrations altogether.
Son and DIL rented a home called Thyme Cottage for a few years and there was a print of "The Wild Thyme Fairy" in the porch when they moved in. He looked on line and said The Wild Thyme Fairy only appeared in the original "Summer Flower Fairy " book and wasn't in many of the newer editions and isn't in any of my books either. There are Complete Flower Fairy books available too but reviews say that recent editions have taken the Fairies out of their surroundings rather than the complete picture originally painted, so I won't be wanting one of those.

These are the little books I had before finding the new one, most have been around since the children were small 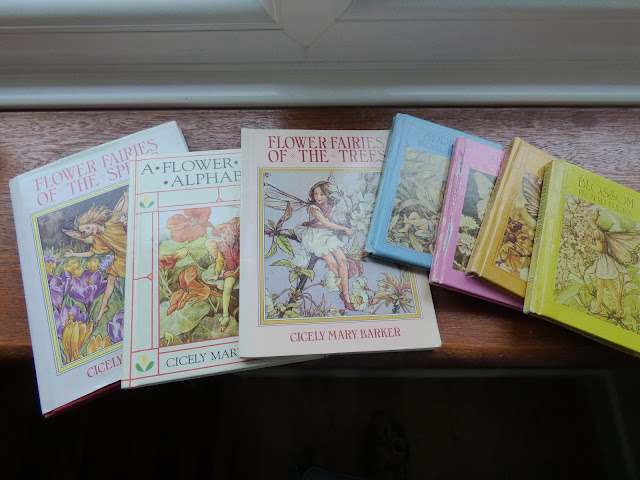 Who knew that looking for a snowdrop fairy picture would lead down the path to finding out so much about an author and her illustrations.


Posted by Sue in Suffolk at 06:00
Email ThisBlogThis!Share to TwitterShare to FacebookShare to Pinterest
Labels: My Books, Snowdrops