They've all arrived, so I went through the seed tin and wrote a list (always a list!). I don't need much but do like to pick the varieties. 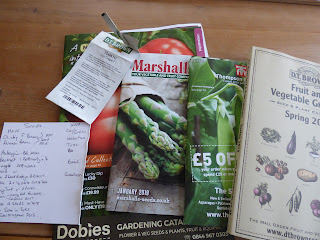 D.T Brown are local to Suffolk, have some good choices and cheapest postage. I need beetroot,  tomato, cucumber, sweet red  'pointy' peppers, leeks, curly parsley, nasturtium and basil. Then maybe sweetcorn...... and here's a weird thing........... I could have sworn that sometime last year  I bought a packet of mini sweetcorn to grow to use for stir frying BUT the packet in the seed  tin are ordinary corn cobs. I even mentioned finding them at a car boot sale in a blog post. So why aren't they what I thought they were? ............No idea.

I'm ordering a big plum type Tomato that I've not tried before called Big Mama , a mini plum that I grew last year - Sungrape. and for something completely different a yellow grape variety called Ildi . I've just 2 cucumber Euphya seeds from last year so have ordered some Louisa, another variety I've grown in the past. Sweet Peppers will be Bullhorn Mix. I have a few very old leek seeds so I'll get some new and a new large pack of beetroot to add to the pack of Bolthardy left from last year. The rest  - parsley, nasturtium and basil I can get from anywhere and probably cheaper - as long as I remember to write them on a shopping list.  D.T Browns don't have a mini sweetcorn so I'll look elsewhere for them, my Essex friends love to grow lots of corncobs so I could pass the packet onto them because I don't want to grow the big cobs.

Apart from the above the other things I'm planning to grow are the same as last year...... French Climbing beans and Runner Beans - both from seed I saved from what I grew. Aubergines, chard, Mange tout peas, lettuces and courgettes.I also have  4 butternut squash seeds to hopefully grow better than last year when only 1 plant survived and produced just 1 squash!