Gorse, common on the heaths of the Suffolk coast where we used to live.


Ulex (commonly known as Gorse, Furze or Whin) is a genus of flowering plants in the family Fabaceae. The genus comprises about 20 species of thorny evergreen shrubs in the subfamily Faboideae of the pea family Fabaceae. The species are native to parts of western Europe and northwest Africa, with the majority of species in Iberia. 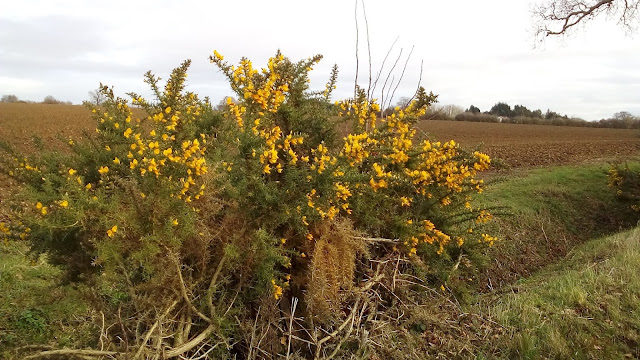 On a back road I use not far from home there are half a dozen gorse bushes on the grass verge between road and field. I always think they look wrong on the edge of the heavy clay soil fields.There are no other gorse bushes anywhere around for miles.
They looked so bright against the brown field and dull sky on my way home from swimming that I had to stop and take a photo..........................just so I could add another page of my Flower Fairies Book to the blog. 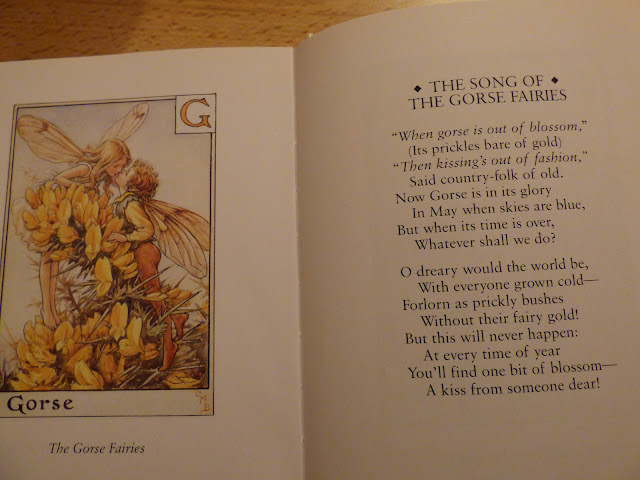 Two Fairies this time, but I do worry about them having bare feet on such a prickly bush!

According to a book I have .....England in Particular  (when I found it at the big charity book sale and mentioned it on the blog in November 2017 I said I would be quoting from it often......but never have) Bach Flower Remedies use the flowers as a cure for  hopelessness and despair; the Pre-Raphaelites loved to paint it and the Swedish naturalist Linnaeus fell down on his knees and wept for joy when he saw the swathes of gorse in flower on Putney Heath.

It was once a valuable commodity because it burns with a high temperature and was used by brick-makers, potters and bakers. It was also used as fodder when the branches were crushed in special gorse-mills to tenderise the spines; under haystacks to stop the damp rising; in field drains to help drainage and to make wine.

Thank you for comments yesterday and previous days.

Thanks to Jen, a Suffolk girl  now in London, I've added a bit after your comment  on the Felixstowe post. Also thanks to Sue at My Ponderosa - we are lucky to have so much history all around us all the time. I have a feeling that those of us who've lived in an area all our lives with ancestors who also lived in the same county often feel quite grounded, so much has happened in the world yet we all survived and will keep surviving whatever goes on, so as you say it gives us a different outlook on life.
Pru commented that I could look on line for details of the Felixstowe Book Festival, which I knew but always prefer the real thing to look through to choose which talks I'll go too.
Much more about St Vincent has been found by "P" on wiki and she has copied some of it in a comment on yesterdays blog - Thank you.
Had to smile at a comment about the Horatio Clare book that I belatedly found - Harsh! Liz D....Very Harsh!

Posted by Sue in Suffolk at 06:00
Email ThisBlogThis!Share to TwitterShare to FacebookShare to Pinterest
Labels: Flower Fairies, Natural world