Nothing much is known about Vincent of Saragossa apart from the fact that he was martyred for his faith in AD 304.

Now his day is only remembered in weather rhymes


Remember on St Vincent's Day,
If the sun his beams display,
Be sure to mark his transient beam
Which through the casement sheds a gleam
For 'tis a token bright and clear
of prosperous weather all the year

(I said I was short of ideas for posts in January!)

But then I found these feathers on the meadow, among lots of other small black/grey feathers  where a predator of some sort (sparrow hawk/kestrel?) had taken some smaller bird. They are small but both have the flash of white ..........so any ideas? I thought maybe chaffinch? 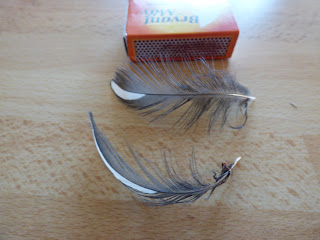 Also did you see the eclipse of the moon in the early hours of Monday morning. The full moon in January is called The Old Moon or the Wolf Moon and it was a Super Full Moon too. Should have mentioned this on Saturday but I forgot.......now it's too late! By chance I woke up at 4.45 and looked out to grey low cloud, which apparently covered quite a lot of the country. A shame really as it was a clear full moon when I went to bed.

Back Tomorrow
Sue
Posted by Sue in Suffolk at 06:00
Email ThisBlogThis!Share to TwitterShare to FacebookShare to Pinterest
Labels: Folklore, Natural world, Saint's Days