Here are the books that I'd ordered and were available to  collect from the library van this week. Jack Munroe's Cooking on a Bootstrap should have been there but it's still in transit - hopefully not lost - so that and several others I've ordered in the last week will be ready for me in February.

There are two more crime books by Joy Ellis who I've recently discovered. I've not read any Donna Leon but Rachel said I would probably like them and this was on the library van shelves so I'll give it a go. The Elly Griffiths book isn't in either of her previous series but sounds a bit ghostly and chilling so might not be my cup of tea and at the bottom of the pile is a new book "The Creative Kitchen" which is subtitled "Seasonal plant based recipes for meals,drinks, garden and self-care". Sounds interesting. 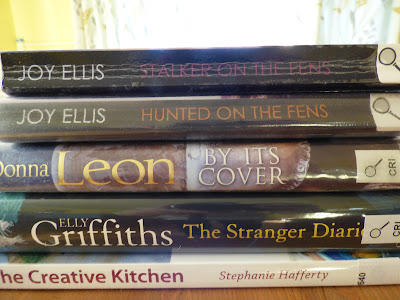 I have kept several still to read from this lot that were collected in December (Tombland, The Kate Ellis book, Murder by Matchlight and A Handful of Ash).
and even a  book collected in November ( The 3 in 1  Ngaio Marsh book) is still waiting for time for me to read it.

Books read are always added to the separate pages and anything else has gone back unread - usually because I just couldn't get into them. The Stately Home Murder by Catherine Aird went back because it did one of those name change things and I'd already read it under it's original name which I now can't remember. I've not added 'How to Give Up Plastic' to the Books Read pages because I just flicked through and decided it was too dull to read properly.


Not sure what I'm doing this weekend I might head to a garden centre and a jumble sale or stay at home and keep warm. One thing I won't be doing is the jigsaw puzzle of Staithes, much too annoying. I started with the horizon and it was easy to find the pieces  but then very difficult to get them in the right order and even though I had the right number of sky bits to fit in the space I couldn't get them in the right places. I tried each piece each way in every space several times but then thought Blow This! and put the whole thing back in its box and into the Car Boot box. 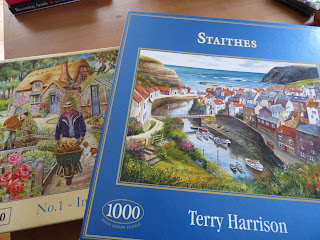 Then I started the other puzzle of the Summer Garden, which didn't seem quite right for a cold, windy winter day but will be much easier to do as it's a House of Puzzles jigsaw like the Corner Shop and the Lifeboat Rescue puzzles that I did without hassles in November.  You can tell I'm a bit fussy about jigsaws just like I am with books! No point spending time on something that's annoying when there is a whole world of other stuff out there to try!

Many thanks for comments about the cheese plate yesterday, it's a keeper at the moment unless I change my mind at Christmas.
Have a good weekend whatever you are doing.
Back Monday
Sue

Posted by Sue in Suffolk at 06:00
Email ThisBlogThis!Share to TwitterShare to FacebookShare to Pinterest
Labels: Jigsaw Puzzles, Library book photo