Thank you to everyone for all the lovely kind comments yesterday, I was in tears reading (which is why I couldn't reply to them) but the tears were in a good way and they made me change the post I'd written for today because it was mainly looking back and there is no point in doing that so I deleted it all and started again...........

.........With a  lovely illustration from "An Illustrated Country Year"by Celia Lewis and  a "first of the month" Folklore post 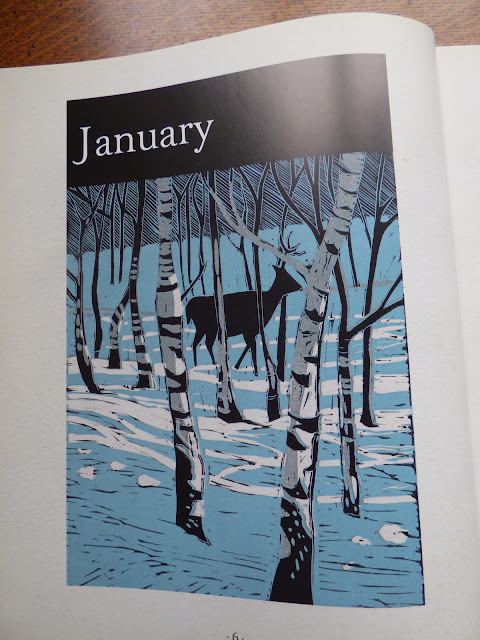 The Anglo Saxons called the first month of the year Wulfmonath, the month when wolves would be hunting for food. Difficult to imagine that wolves roamed the woods and forests of England back in the 6th Century.

January is always colder than December because

As the day lengthens, so the cold strengthens


The Grass that grows in Janiveer
Grows no more all year

I think this is definitely wrong as we do get days more than  6℃ in January which is said to be the temperature at which some grasses will grow. Thank goodness low light levels means that grass grows so slowly it doesn't need cutting all through the winter.

I don't know if bell ringers still ring in the New Year in parish churches?

Ring out, wild bells, to the wild sky,
The flying cloud, the frosty night:
The year is dying in the night
Ring out wild bells and let him die


An old rhyme suggests an indication of weather to come depending on the wind direction.......

If New Year' Eve night wind blow south,
It betokeneth warmth and growth,
If west, much milk and fish in the sea;
if north, much cold and storms they'll be;
If east, the trees will bear much fruit;
If north-east, flee it man and brute.

Did anyone notice which way the wind blew last night?

January 1st  became a Public Holiday in England in 1974, mainly because of all the absenteeism due to people staying up far too late and drinking too much.
Hope everyone reading this didn't!

I have no idea what this year will bring but I guess we'll all find out in due course.

Thanks again for those comments yesterday, I love that my blog is the first some people read and also love to have comments from people who have never commented before and from people who have become blog friends over the years and Good wishes to Hazelc for her son. It's blogging and kind comments that have kept me going through the months since May.

Posted by Sue in Suffolk at 06:00
Email ThisBlogThis!Share to TwitterShare to FacebookShare to Pinterest
Labels: Blogging, Folklore