Before I went to the church I called in to see my cousin and her husband who have recently moved here. "Which Church are you going to" asked my cousin. " The one in the town" I said and I THOUGHT I knew exactly where I was going "How many are there?" I asked and A told me of the one just along the road from their home and the one just off the main shopping street. "I'm sure it's the one nearest the town" I said and went and parked in the town centre car park and looked at the book 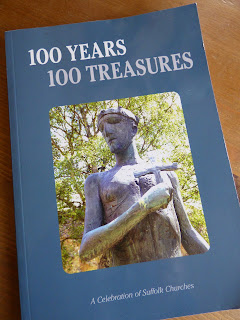 and found I should have been at the church near their home. DUH! In my defence  - the page of the book about St Johns didn't have a picture of the exterior and also didn't have the road name BUT I should have looked at the book earlier in the day!

Anyway this is St John the Baptist in Orwell Road and not St Andrews ( which is a strange concrete building) in St Andrews Rd.

Not an old flint church like so many I've visited but an early 20th century brick  church built for the expanding population of Suffolk's main seaside town. The spire soars 130 feet above the town. 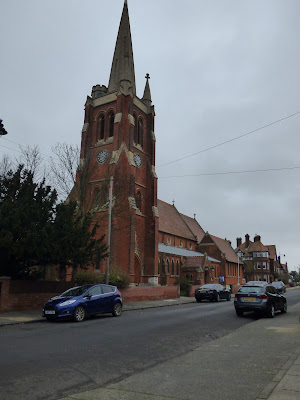 Lovely and warm  inside............there was a notice saying the heating was on so Please Shut the Door.
The lights were switched on around the choir stalls and and Altar but the rest of the church was very dark 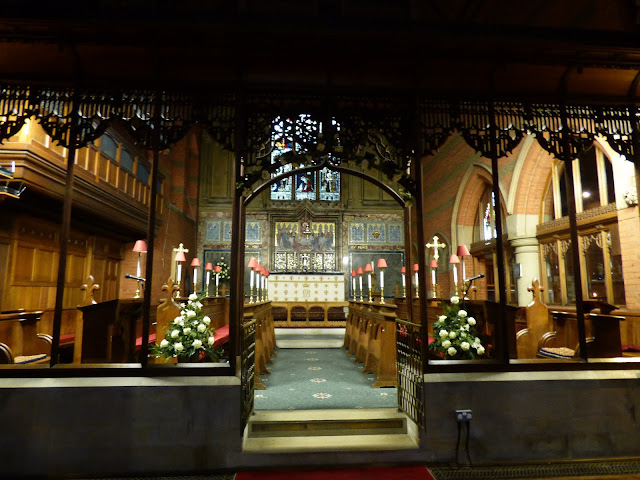 and my photos are dreadfully poor. Much better photos on the Suffolk Churches website HERE   where there are close up photos of all the Saints featured in the stained glass windows on both sides of the church. 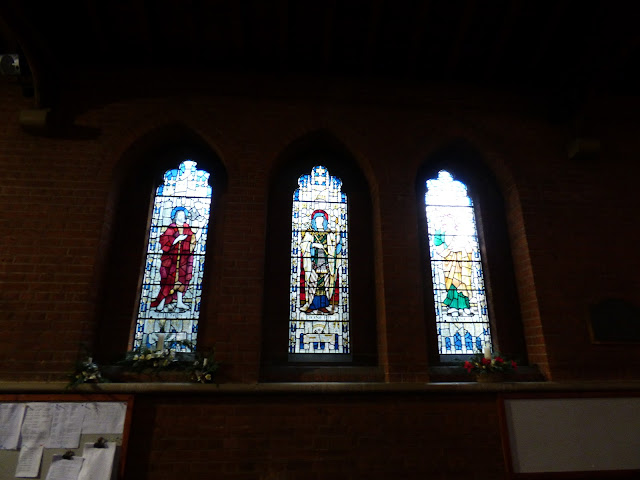 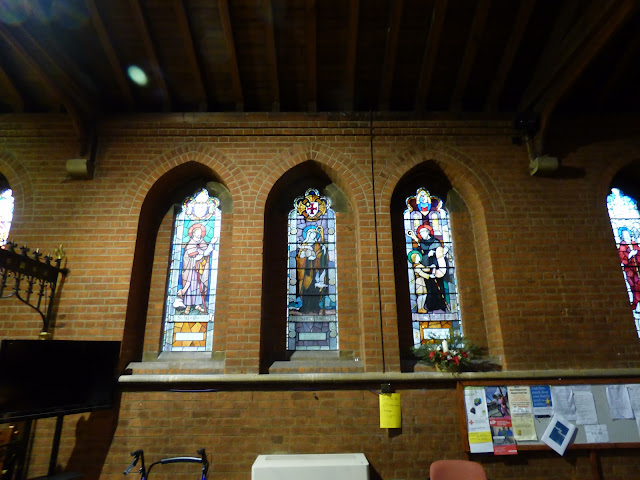 The reason this church has a page in the 100 treasures book is because whereas many churches have 14  Stations of the Cross around the church, St John has 16. They are all simply etched onto slate and fixed to the pillars 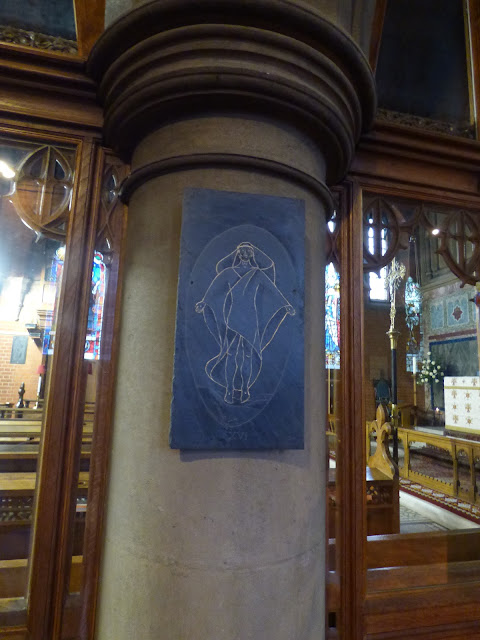 Some are much smaller 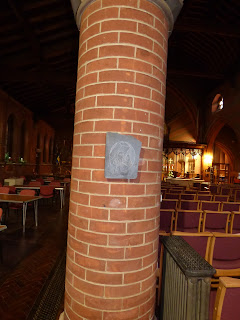 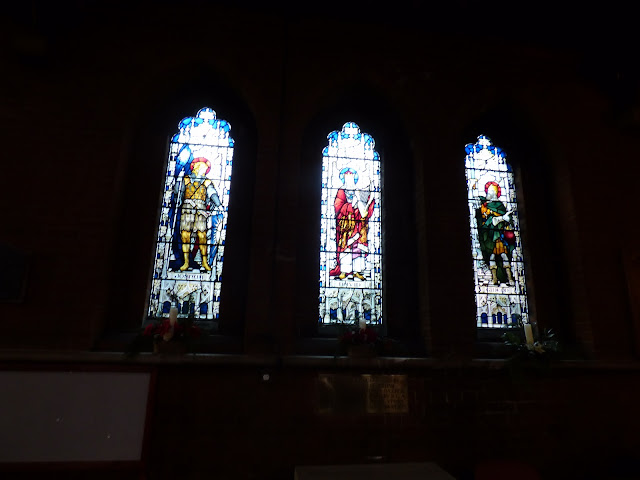 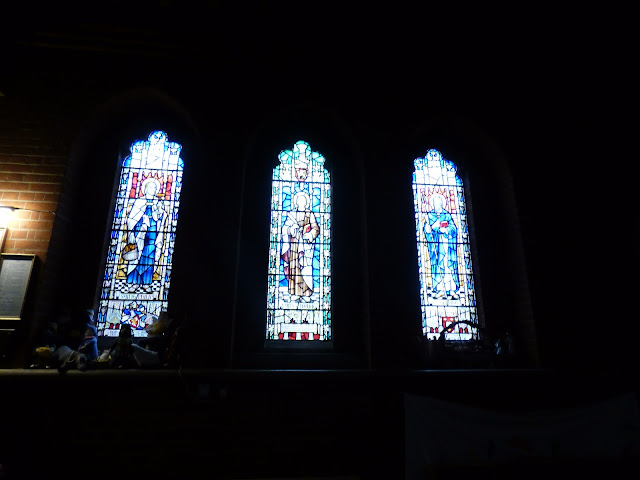 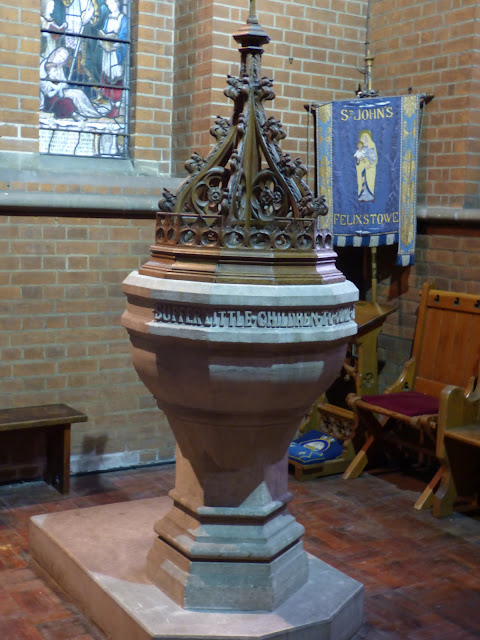 
Felixstowe, or The Last of Her Order.

With one consuming roar along the shingle
The long wave claws and rakes the pebbles down
To where its backwash and the next wave mingle,
A mounting arch of water weedy-brown
Against the tide the off-shore breezes blow.
Oh wind and water, this is Felixstowe.

In winter when the sea winds chill and shriller
Than those of summer, all their cold unload
Full on the gimcrack attic of the villa
Where I am lodging off the Orwell Road,
I put my final shilling in the meter
And only make my loneliness completer.

In eighteen ninety-four when we were founded,
Counting our Reverend Mother we were six,
How full of hope we were and prayer-surrounded
"The Little Sisters of the Hanging Pyx".
We built our orphanage. We built our school.
Now only I am left to keep the rule.

Here in the gardens of the Spa Pavillion
Warm in the whisper of the summer sea,
The cushioned scabious, a deep vermillion,
With white pins stuck in it, looks up at me
A sun-lit kingdom touched by butterflies
And so my memory of the winter dies.

Across the grass the poplar shades grow longer
And louder clang the waves along the coast.
The band packs up. The evening breeze is stronger
And all the world goes home to tea and toast.
I hurry past a cakeshop's tempting scones
Bound for the red brick twilight of St.John's.


I'd planned to go around the charity shops in Felixstowe - There are Lots - but the weather was freezing so I only did a few and found nothing. I also planned to go in the Bookshop and put my name down for a brochure about the Book Festival held in the town at the end of June every year (they sponsor the festival) but they were closed for the week for holidays. I'd already asked my cousin to look out for a brochure for me nearer the time, so hopefully she will spot one for me. Last year I was able to pick one up at the Tourist Information Centre in Stowmarket but funding for TICs has been cut and like most of the others in Suffolk the Stow one closed at Christmas.

Posted by Sue in Suffolk at 06:00
Email ThisBlogThis!Share to TwitterShare to FacebookShare to Pinterest
Labels: Felixstowe, Suffolk Churches