On a whim I decided I wanted to make a homemade version of the famous Branston Pickle. No idea why..........just fancied an experimental challenge and  I quite like making chutney (except when I was cooking up big batches all the time to sell, it got a bit tedious then!)

Many of the recipes I tracked down online used some ingredients that I didn't think were in Branston in this country and as I continued looking it seemed that this is made in many countries but using different recipes. Some said that Crosse and Blackwell, the company who first made the famous pickle had been sold out to other companies who no longer use the original recipe. I haven't bought any chutneys or pickle for years so I can't even remember what it tasted like.

I looked through my recipe books in the kitchen and then remembered I had this book upstairs and sure enough it had a recipe, but I was a bit dubious about using it word for word. 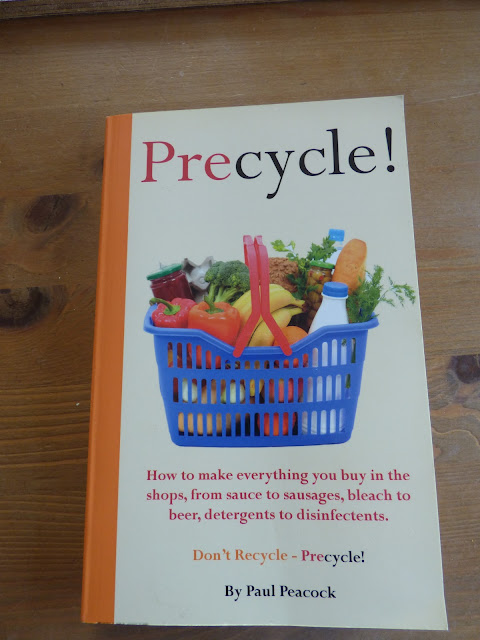 The bloke who wrote this was at one time editor of Home Farm magazine and he and his wife turned out more than two dozen books on gardening, animal keeping etc and plugged them furiously through the magazine. I could never fathom how they had time to try all the things they wrote about  and judging by how poor the books were I don't think they did. Unfortunately I got this book early on before I knew all that. (Main criticism of this book is the number of things that you have to buy in order to make the things that you would otherwise buy ready-made! if that makes sense?)

I watched two "professional" English youtubers making a variety of Branston (or Ploughmans Pickle) in their kitchens. One was weird - he poured in some demerara sugar and then said "That would have been better if it had been dark brown sugar". I thought "well why the heck did you use demerara then?". He then said he would cook the swede and carrot a bit first to soften them...........but he didn't!

The ingredients in some on-line "pretend Branston" recipes included a small amount of celery and quarter of a cauliflower, but I didn't want to buy too many things specially, so in the end I decided just to use the cheapest bought things.......carrots and swede (which is called turnip in Scotland and rutabaga if you are in the U.S) and swapped gherkins for cucumber - from the greenhouse and then bunged in some green tomatoes also from the greenhouse. I reckoned one of the most important ingredients was dates - for the colour as well as the sweetness and I'd planned to buy some anyway to make the Gooseberry and Date chutney. Dates turned out to be the most expensive ingredient.

This is my recipe concoction

I started by gently cooking the swede, carrots and onion in the vinegar for 20 minutes.

I brought all this back to the boil and then simmered it gently for an hour, stirring regularly and adding a bit more malt vinegar now and again.

Then I added 250g of soft  Dark Brown Sugar and cooked it for another half an hour, stirring and adding a little more vinegar. I used a potato masher to mash the mix a little to change the texture of some of the chutney.

It still didn't look dark enough so I added a Tablespoon of Black treacle, I didn't want to add too much treacle because on my searches I'd found some mentions of it adding a burnt flavour.

When it looked about right and there wasn't too much loose liquid I potted up into 5¾ x 12oz  sterilised jars. 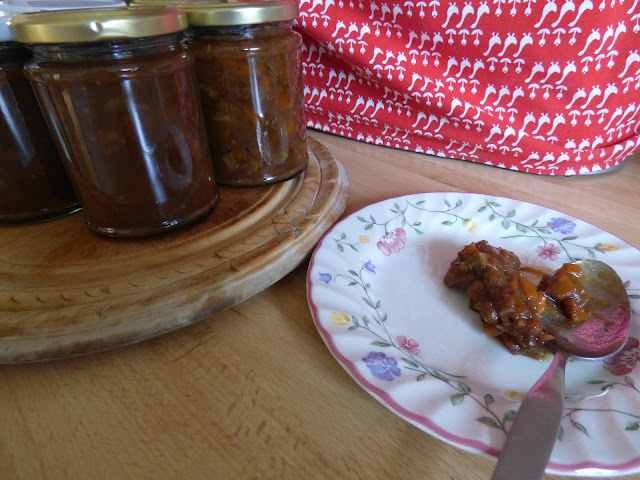 Still not as dark as I remember, maybe they use a caramel colouring?

As yet it's difficult to tell how true the taste is to the real thing because it needs keeping for a month for the vinegar sharpness to tone down a bit.

The only things bought especially for this were the carrots, swede and dates, everything else was stuff I keep in anyway and things from the garden and greenhouse. Plenty of dates left for another chutney later.

The real test will be when I take a jar to Col's Brother as I know he still buys the proper stuff.

An interesting experiment to undertake, kept me out of mischief for several hours! and another thing done for the Christmas Hampers.

Posted by Sue in Suffolk at 06:00
Email ThisBlogThis!Share to TwitterShare to FacebookShare to Pinterest
Labels: Christmas Hamper Gifts, In the Kitchen, Recipes