21st September and a Saturday Round-up

Last Saturday I was worried.........worrying about things that might not happen, things other people don't worry about.

So the other side of the coin...........the things that don't frighten or worry me that maybe worry some people

Haven't found anything at a car boot sale to blog about for weeks until last Sunday, when I found this lot. Mainly books for the grandchildren again, 2 are specially for Willow who will be a big sister in January. Two are sticker books to put away until they are older.  The "Verdict of Twelve" is a British Library Crime Classic that I've not read because the library don't have it. £3 for the 6 children's books and 50p for mine. 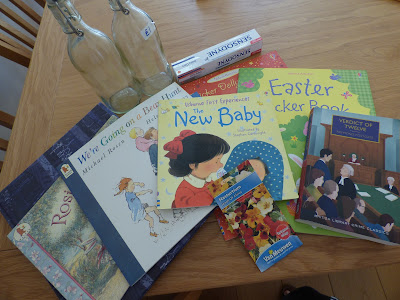 A tube of toothpaste and two clip top bottles all for £1 each. I'm not having much luck with finding bottles for the limoncello that I'm going to make for the hampers. I found one that had a stain inside that just wouldn't clean and another that didn't keep tight closed. They both went in the glass recycling bank. These two are better and even buying 4 from boot sales and chucking out two is still cheaper than buying 2 new.
Packet of Nasturtium seeds for next summer for 50p and also 50p for my third try at making a scrapbook of country sayings and cuttings from the folklore diaries. I got  books from boot sales earlier this year which I thought would do but the pages were too thin in one and another didn't have enough pages. Both of those were re-sold when I did my 2nd car boot sale.

Another week of being tired, so a bit of gardening and a bit of resting and no swimming (tut tut!). The autumn garden clearing looks a big job when I think about doing it on my own, but if it's tackled a bit at a time I guess I'll get there in the end, just like last year.

This weekend the  Rugby World Cup has started, so I will enjoy watching the games and it carries on all through October, although because of the time difference (it's in Japan), all the matches are on TV in the mornings, some at early as 5.45- don't think I'll be watching those live. Also hope to visit a village garage sales event and coffee morning............not my village.............nothing happens here!

Have a good weekend
Back Monday
Sue

Posted by Sue in Suffolk at 06:00
Email ThisBlogThis!Share to TwitterShare to FacebookShare to Pinterest
Labels: Being Grateful, Car Boot Bargains, Christmas Hamper Gifts