The Last Saturday in September

It was good to get some rain at last during the week, far too late for plumping up apples or beetroot but it will help the trees. As usual we didn't get as much rain as other parts of the country, so no flooding, just muddy fields which will mean muddy roads as soon as the sugar beet harvest starts
There were enough dry spells to get some more garden clearing done, still rather a lot to do.

During the week I made a few jars of Redcurrant and Rosemary Jelly with the 3lb of redcurrants I got off the bush earlier in the year and fired up the bargain bread maker to try a malt-loaf. The instructions said "add sultanas at the bleeps during second kneading". I think the bleeps must have been much earlier in the programme than I thought, so I ended up with sultana-less malt loaf. Next time I'm going to swap the black treacle in the recipe for more malt to give it a bit more maltiness.

I've been dithering about ordering more peanuts etc. for bird feeding as it's getting quite an expensive business, costing over £200 in 2018 - for feeding all year round. Going out to top up the feeders was always Col's job and when I was feeling a bit down it seemed like just one more thing I had to do. Anyway I've not been feeding through the summer and wondered if I started again would the birds return? The feeding station was in the front garden, positioned for Colin to watch them from his chair but not in my direct eye-line so I moved it closer to the living room window, cleaned everything and filled up and waited. It didn't take long, first a Great Tit, then Blue Tits, followed by the Long Tailed Tits, Sparrows and finally the Coal Tit. Just waiting for the Goldfinches on the Niger seed. They do all fly off in a rush if Polly decides to sit on the window-sill but seem to know that she's behind glass and soon come back.............she quickly gets bored with watching anyway.
So fresh peanuts and some suet blocks have been ordered and they are coming with a free gift of pre-filled jumbo insect feeder - whatever that is. 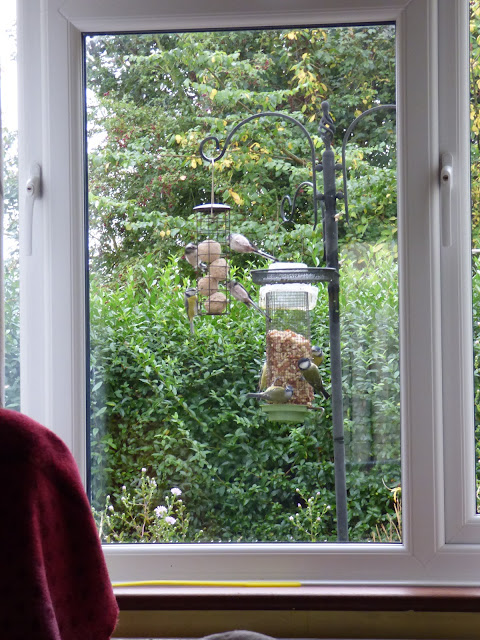 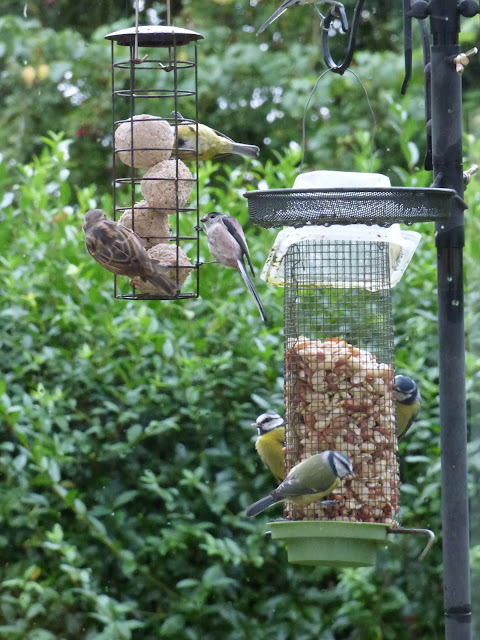 Last weekend Needham Market boot sale was HUGE, Stonham Barns on Sunday was much smaller but between them I had some good book finds and a couple of other bargains.
Someone had a box with the sort of books I love and at 50p each I soon snapped up one about Wassailing, another called the Treasury of Tree Lore and The Spirit of the Hare. 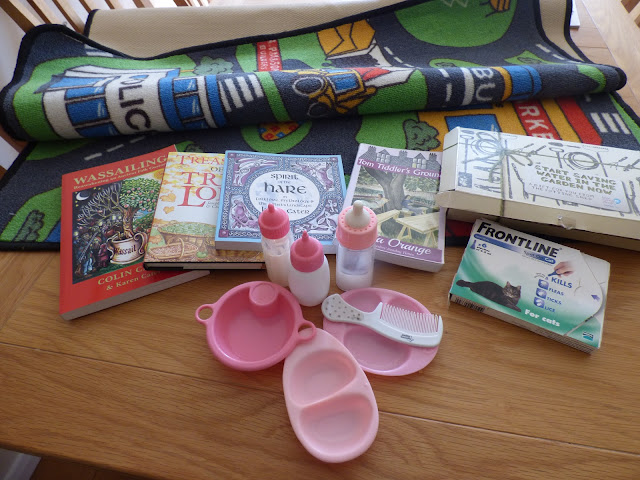 Tom Tiddlers Ground was a good spot, luckily the spines of the Furrowed Middlebrow reprints are quite distinctive. It's another of these books from Dean Street Press that the library haven't bought for stock. I paid £1.
I was pleased to find a decent road play-mat to keep here for the grandchildren - paid £5 and it looks hardly used. I bought the doll feeding bundle for 50p and the Frontline for the cat - 5 doses in this box and well in-date for £3. The box labelled 'Start Saving Water in the Garden' is full of pouches of crystals and mats that hold water to add to containers for next years basket tomatoes. I expect they were originally given out for free although not from the water company here, but I was OK with paying 50p.


This week I am grateful for

Back Tomorrow with Michaelmas Folklore
Sue

Posted by Sue in Suffolk at 07:49
Email ThisBlogThis!Share to TwitterShare to FacebookShare to Pinterest
Labels: Being Grateful, Car Boot Bargains, Natural world