The speaker at Big WI was a very enthusiastic lady telling us just a little of her very unusual life.

In 1993 at 50 years old she went on her first trip abroad......to Turkey. She loved it so much that the following year she went back to stay for much longer. She ended up working in a restaurant kitchen. A while later the head chef invited her to visit his family and they travelled by bus for several hours up into the hills where she discovered a village that had had no outside influence, the women still dressed in their national costume. She was fascinated by the history and traditions and she and the chef decided to buy an old farmhouse.
All these years later they are still together, she is 76 and still full of energy. In the summer they live in Suffolk, giving talks, wearing the  traditional costume,  about all aspects of life in the Turkish village and in October each year they return to their farmhouse and immerse themselves back into Turkish life.
She said that they had given over 1,000 talks, but the one she had come to give this time was all about the total eclipse of the sun in 1999. 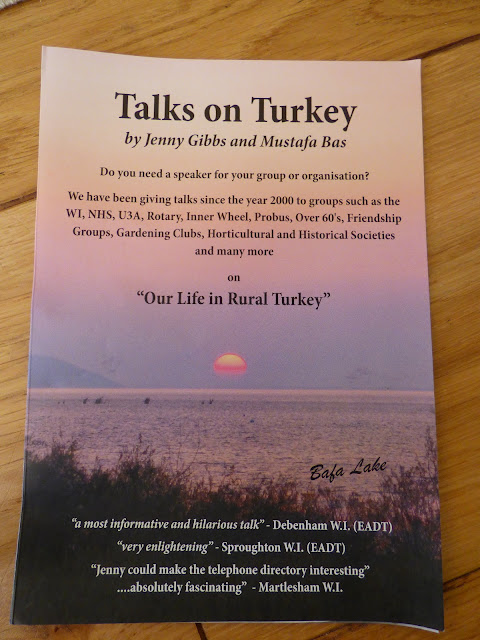 In early 1999 she was on her own in this country visiting family in  Ipswich and bought a copy of The Big Issue which happened to have a feature about the part of Turkey which would have the best view of the total eclipse. After mentioning this to a friend, the friend promptly bought tickets and  arranged for them all to travel together from Jenny and Mustapha's home, all the way across Turkey to view the eclipse.
To cut a long story short, cloud cover....unheard of in Turkey in August....... spoiled the view for the dozens of TV companies from all round the world who had gathered. But with a bit of luck they managed to talk to a weather station who told them another place, 3 hours drive away that would have a good view. The area was so remote that the villagers there knew nothing about the eclipse so Jenny and her companions and the villagers who followed them up the hill were the only people to get a good view.

She brings crafts from the village - scarves, pashminas, dolls and jewellery to sell after the talk,the money all goes back to the people who use it to fund university education for their children.

An amazing lady with an amazing story.


Many thanks for comments about the little wood carving mushroom thingy. I'll do the mantel-piece for autumn sometime in the next week or two, and will take a photo.