Thank you to everyone for comments about the auction on yesterdays post, sorry for not replying, I had a day off!

On Saturday I had a lovely morning out in Ipswich, visiting some of the places only open to the general public on Heritage Open Days.
I've put in some links which explain more if you are interested.

First of all must show you the Cornhill "modernisation" now the concrete henge has been removed. Here's how it looked a few weeks ago. Very strange concrete things put there just a year ago and already falling to bits 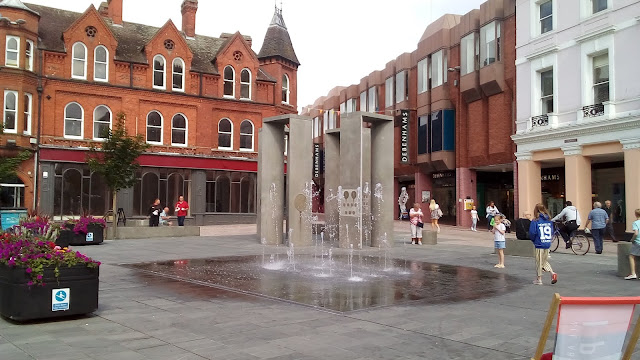 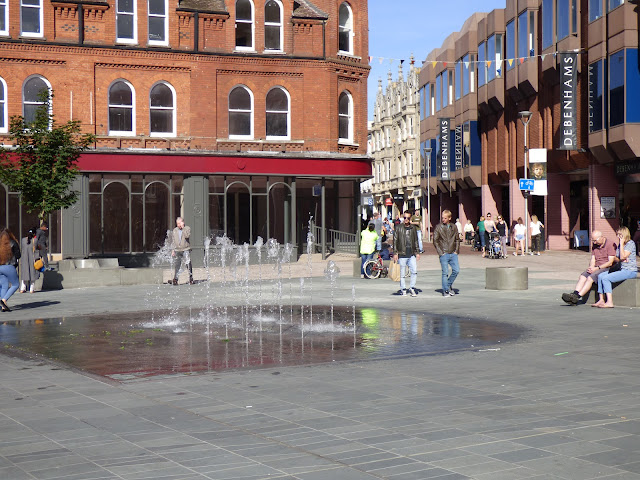 My sister said there was lots in the local paper about the changes.

Anyway, back to my real reason for being in our county town

The front cover of the brochure shows the Unitarian Meeting House reflected in the Willis building. Both open for visiting but I had other places to go. 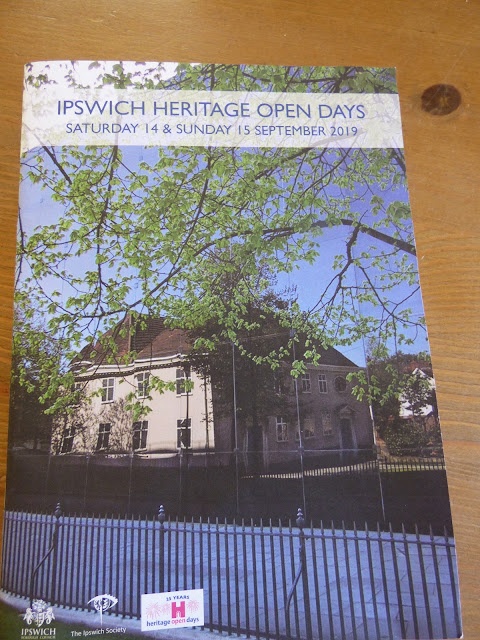 And this is the actual Willis Towers Watson Building now 40 years old (originally it was Willis Faber). Famously designed by Norman Foster it was revolutionary in the 1970's. An open plan office building that even had a swimming pool and still has a roof garden. It caused much controversy when it was built but we are all used to it now.
It was open for visiting but modern buildings like this don't really interest me so I didn't bother 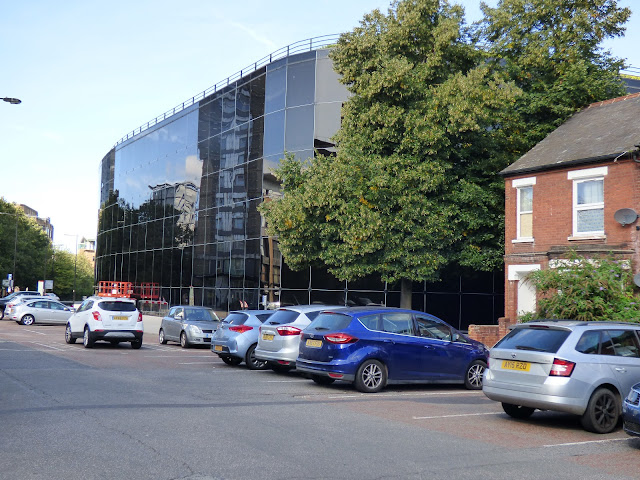 Just two photos of the outside as I walked by. 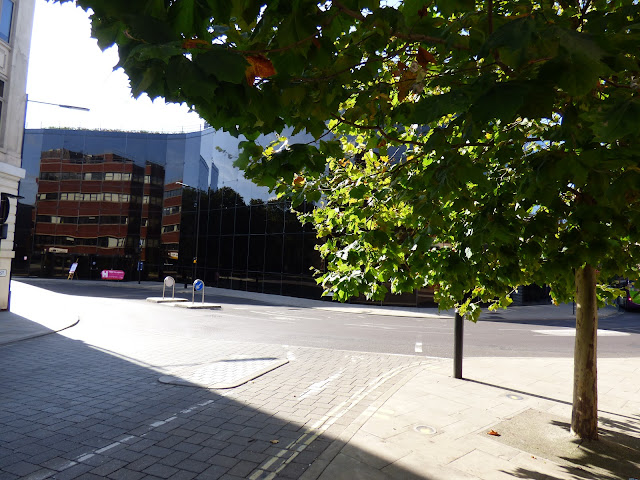 Now this is much more interesting to me. 3-5 Silent Street. (The only Silent Street in the country?) A medieval Grade II listed timber-framed building. Originally part of a much larger building built as an Inn. Just a small part open on Saturday, one ground floor and one first floor room...on the left of this photo below 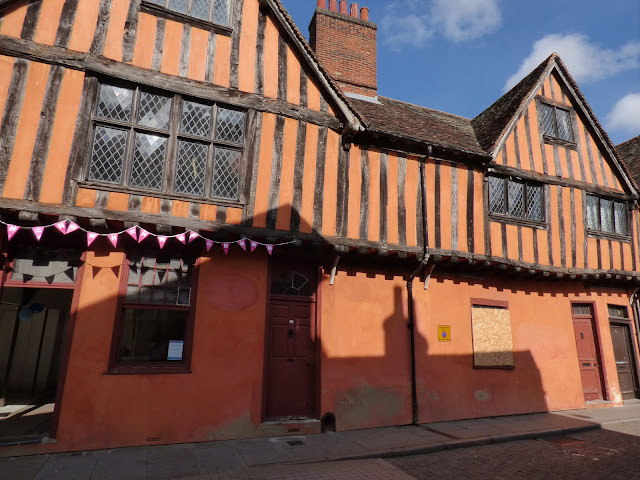 The two buildings here were once one Tudor Inn- One of the most complete and important Tudor Inns anywhere in the country. 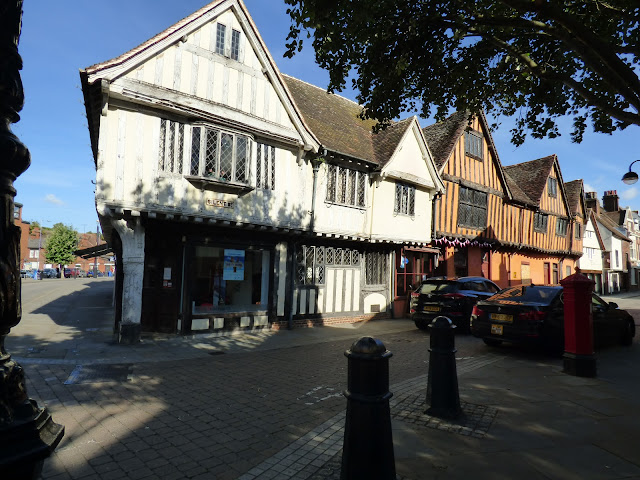 There were lots of information boards to look at in this building, now empty since it closed as a second-hand  book shop in 2011 and a leaflet had been produced to explain the history. 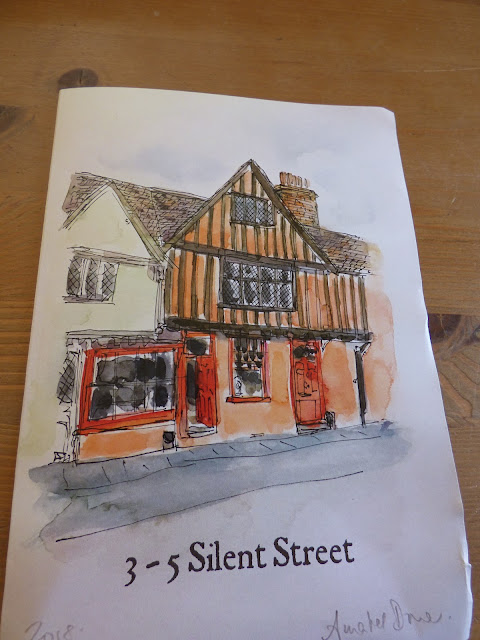 It seems it was always an important high status Inn because it lay opposite an important house, now demolished, called Curson House.  Cardinal Thomas Wolsey hoped to use Curson House as his retirement home (he didn't live long enough to retire!) and people from the entourages of the visitors to Curson House would have stayed at the Inn. Catherine of Aragon visited Lord Curson in 1517 and Henry VIII in 1522. 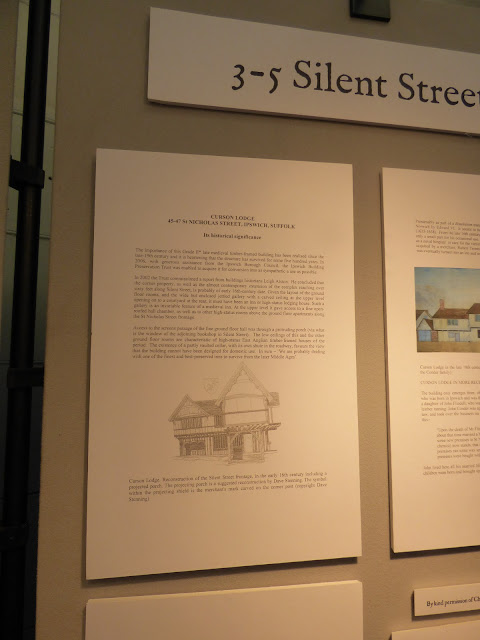 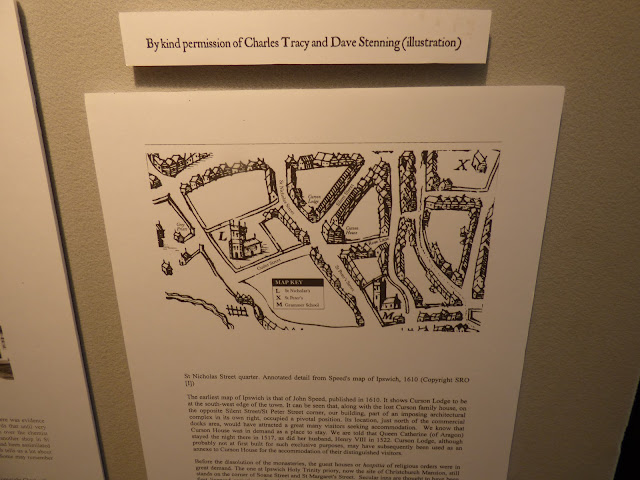 Wood panelling in the downstairs parlour is thought to be original 17th century, although it has been cut and moved since then. (The bunting is for Heritage Open Buildings) 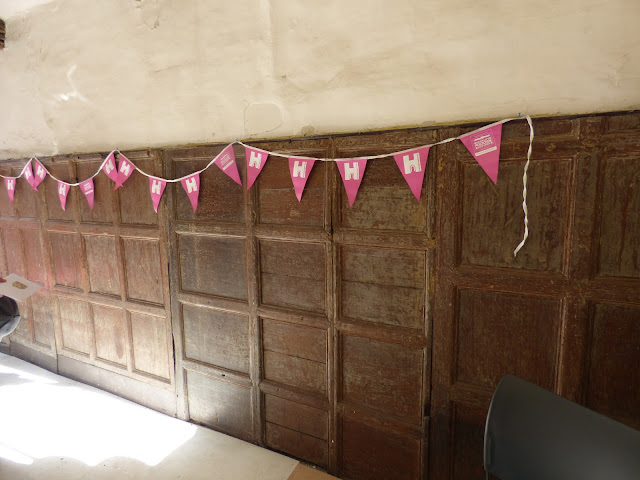 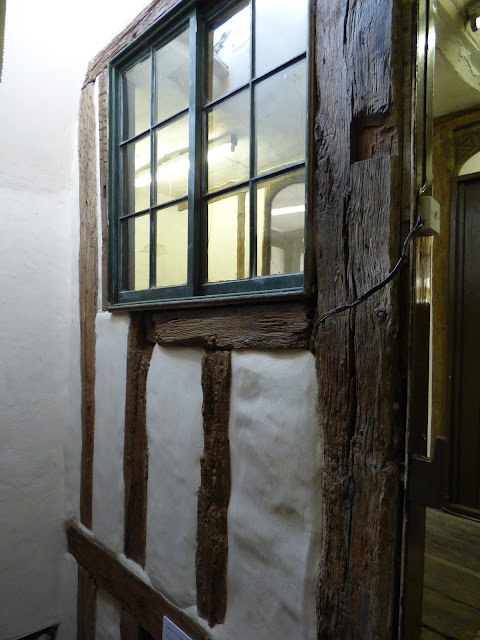 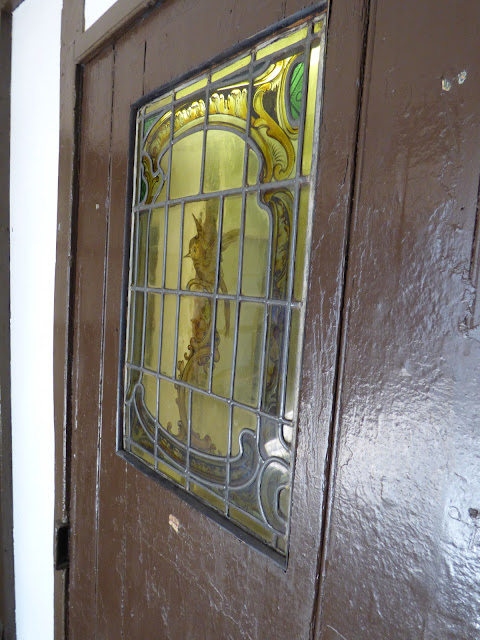 Photos show the uses of the building during the first half of the 20th Century. 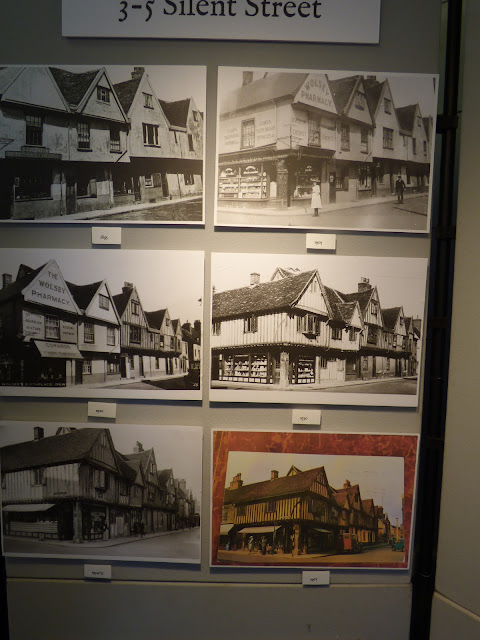 Photos of some of the wallpapers found under the modern paint and plaster. The earliest dating to Georgian period 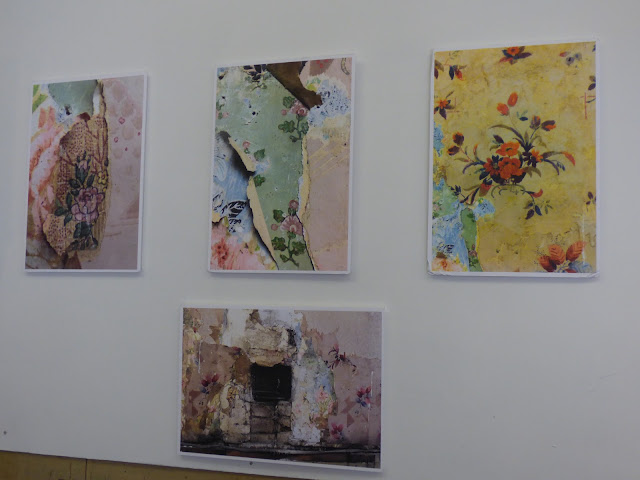 I also visited the Bethesda Baptist Chapel. I'm sure I've been here in the past when taking part in singing competitions as a member of Wetherden Baptist chapel. Bethesda is huge chapel built in 1912 in classical style on a site used by various religious groups since 1782. 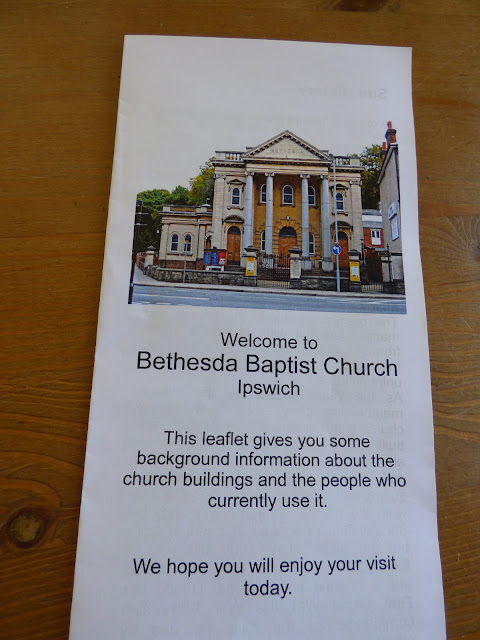 Polished granite two storey columns at the front and wide steps leading up to the big doors. 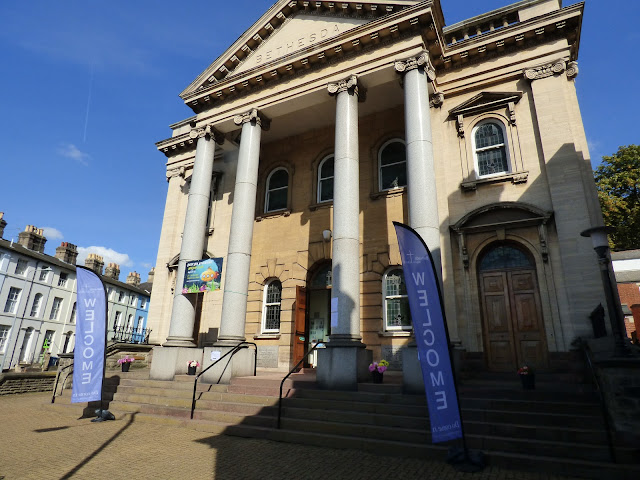 There is an upper balcony on 3 sides of the chapel with the organ up on the 4th side. The church was full of donations for Harvest Festival - lots of tins of food rather than the fresh produce with which we used to decorate our village chapel in the 1960s.

From the entrance to the front 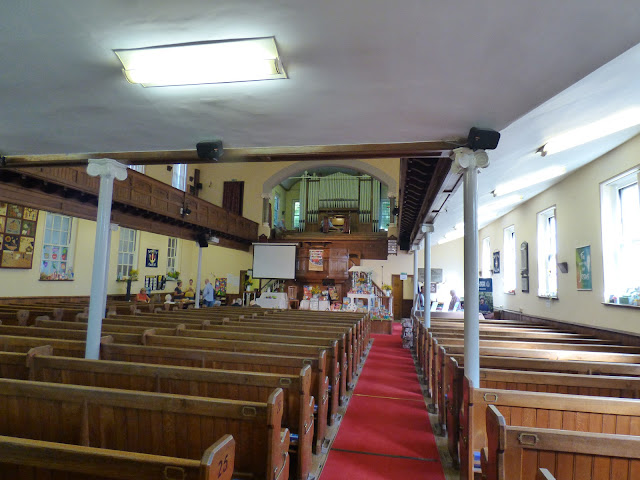 And from the front looking back to the entrance. I had a nice chat with the lady who was welcoming people by the door, she had once lived in Great Finborough near Stowmarket and knew the leaders at Wetherden Chapel when  I was going there. 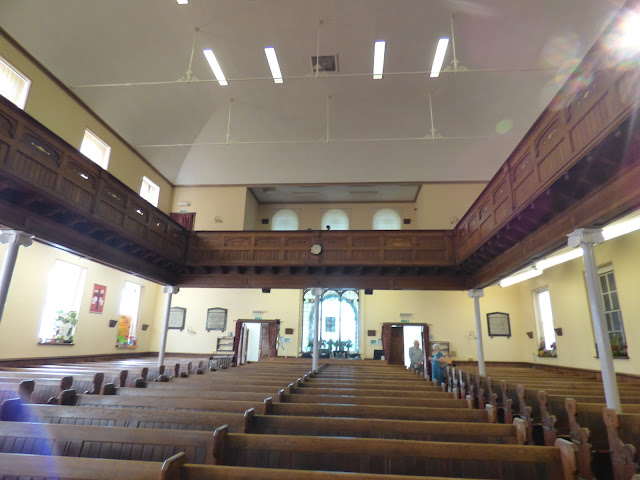 I also visited two Churches that get a mention in the 100 Treasures Book. One I've tried to visit before but it's normally locked. I've written separate posts for them which will appear sometime later this month.

Still many other interesting locations to visit on next years open days.

Another thing to mention is  spotting an Ipswich Town FC legend!......... GEORGE BURLEY  In Costa in Debenhams just enjoying a coffee with his wife, several people noticed him, you could see them nudging each other........ but no one bothered him.
He was playing for Ipswich back in the days of 1973-77 when I used to go and watch with boyfriend of the time.
It's fair to say he was a better player than Manager - as a manager he kept getting sacked!

Posted by Sue in Suffolk at 06:00
Email ThisBlogThis!Share to TwitterShare to FacebookShare to Pinterest
Labels: Ipswich, Local Events