Pulling Autumn Out Of The Cupboard

Mabon, as the Autumn Equinox is called in Pagan folklore, thought to be named after the Welsh god of mythology is a turning point in the wheel of the year and Autumn is really here so  I hauled my box of odds and ends out of the cupboard under the stairs, fished out Autumn and put Summer away until next year.

Having been without a  mantel shelf for many years at Fareacre it was during our first Autumn here in 2017 that I  found some things to make the room a just little bit different for a few months. Now it's become a regular thing.  BiL is having a woodburner installed in his house and he said it's no longer permitted to have a wooden mantel shelf......... "elf and safety". Ho Hum 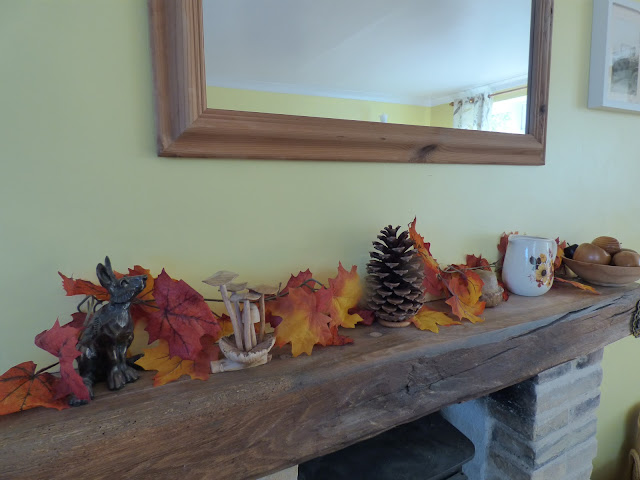 My Hare stays through all the seasons and this is the third autumn for the leaf swag, fir-cone, pottery acorn, jug and wooden fruit and the new addition of the wooden mushroom.
I think it cheers things up for a few weeks, bats and pumpkin will be added for Halloween. Need to keep my eyes open for a few different bits for winter.......second-hand of course.

It was only after I'd put everything out that I remembered the chimney sweep will be coming in a couple of weeks and I'll have to take it all off again!


Posted by Sue in Suffolk at 06:00
Email ThisBlogThis!Share to TwitterShare to FacebookShare to Pinterest
Labels: Mabon, Seasonal Display