This was a nice surprise. When I transferred my book pick up point to Debenham library I wasn't expecting so many to arrive all at once. 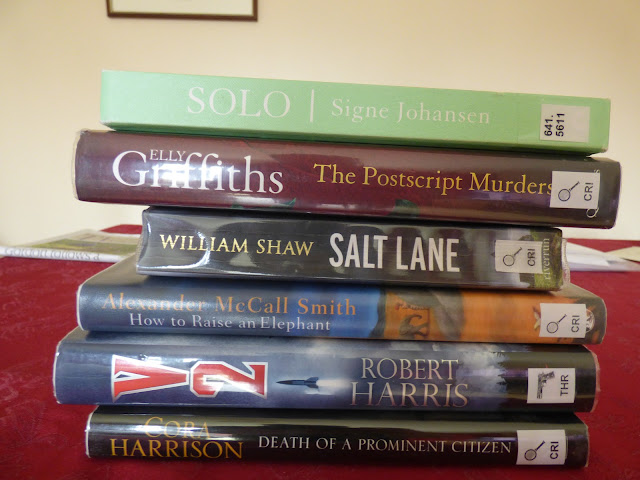 From the top
Solo - a cooking-for-one book.....but a bit fancy and faffy for me and it includes how to roast a chicken - which didn't really seem like something that ought to feature in a solo cooking book.
Elly Griffiths - The Postscript Murders. This is the second of a new series and I can't remember a thing about the first so will need to look up the blurb to remind myself.
William Shaw - Salt Lane. A new to me author, mentioned on someones blog I think. I've had a quick flip through and it looks pretty violent - not sure I'll get into it.
Alexander McCall Smith - How to Raise an Elephant. A quick read - I've finished it already. This is the 21st in the No. 1 Ladies Detective Agency series set in sunny Botswana. A lovely gentle read - no violent crime and in this one no crime at all.
Robert Harris- V2. I've read a few of his books - always a meaty read.
Cora Harrison - Death of a Prominent Citizen. The 7th in a series set in Ireland in the 1920's during the first troubles.
These should see me through a week or two before moving and after I got home there were emails for two more that must have been in the bottom of the crate the library lady was unpacking.
Speaking of moving ......the last of the legal searches for the place that the people in 'my' bungalow are buying in Kent was due to be with their solicitor last Friday. So as long as there aren't too many queries and questions and with fingers tightly crossed exchange and completion should happen during the last week of March. AND thank goodness I've been able to pay for the week after Easter here so I can stay a bit longer in case the removal company are too busy to move me on the day I get the key. All extra expense but better than being homeless and it should make moving in less stressful.
Back Tomorrow
Sue
Posted by Sue in Suffolk at 07:00
Email ThisBlogThis!Share to TwitterShare to FacebookShare to Pinterest
Labels: Library book photo