It's the last Saturday in March and completion on the bungalow  purchase isn't going to happen next week after all. My solicitor has been offered a "tentative" date of 7th April. This is pushing things toward the last day I can be here on the 12th - 😟. I've contacted the removal company with this "tentative" date and they only have the 8th available  until the following week...... yikes......It's been "tentatively" booked. The hold up now is caused by the equity release company's (who are lenders to the bungalow owners) solicitors having to look through all the legal searches of the place they are buying in Kent.

So what have I been doing to fill yet another week pretending to be on holiday?
Brother in Law brought my bike round for me once the weather was fine, hadn't cycled for 3 weeks so did the smallest loop for practice which is about 2½ miles. Then a bigger loop of 4½ miles which involved some up-hill bits and walks, just as I got about halfway it started to rain - which wasn't in the weather forecast - soaked me through! Glad the holiday let has effective heating and radiators to dry things. I've bought a cycle helmet as the roads are busier around here......been cycling for 55 years and have never bothered before ...but age is creeping up! I've only ever fell off a few times as far as I can remember. Once braking on a downhill black ice morning - nasty, once when out with family cycling and one of them touched my back wheel and once - unexplained - while just stopping and getting off!
On Thursday, seeings as there is loads of time to kill, I did a wander round Lidl in Stowmarket - I'd not been there for ages as it's not my favourite shop, before doing the same around the usual Asda - filled most of the morning!
It's quite good to be able to walk to  a small shop from the holiday let although their fruit and veg is abysmal and their other things expensive - but I've been treating myself to a copy of the Radio Times each week. There's quite a lot of reading in it as well as all the TV schedules. Once I'm settled it will be a plan to take out a subscription to get it cheaper. That makes 3 treats to enjoy in my new smaller and cheaper home.............A regular bunch of flowers, a Radio Times and book purchasing without guilt! I'll probably share some of the house sale profits with the children too!
Another benefit of walking in a village is spotting things out for sale at peoples gates - like this rhubarb at 50p a bundle. 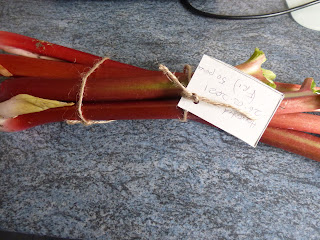 It was only after getting back with it I realised I don't have custard powder to make a Rhubarb fool or an oven dish and flour etc to make a crumble (In boxes somewhere in store!) I'll see what an egg custard is like without cornflour or vanilla!
There's a Silver Birch tree here, just over back fence by the road. I've been watching it slowly coming into leaf and there's often a couple of Blue Tits or a Robin sitting in it. I'm still thinking about some Silver Birch out the front of the bungalow even though my cousin said "don't do it!" due to the mess they make with their pollen and catkins later in the year.........Lovely bark set against the grey sky yesterday morning. 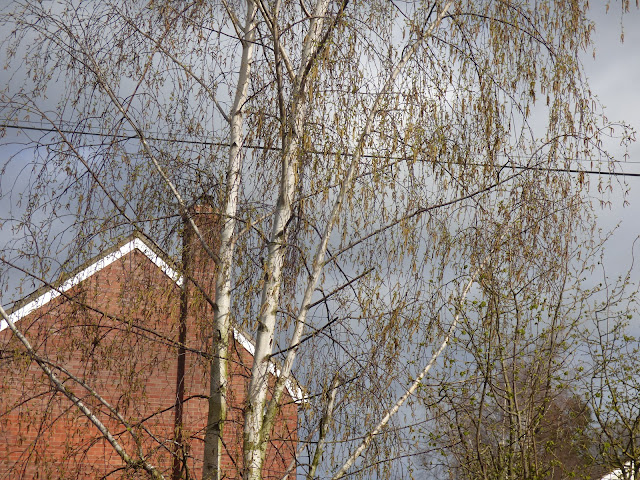 This week I've been grateful for
Have a good weekend, I'll be back Monday
Sue
Posted by Sue in Suffolk at 07:00
Email ThisBlogThis!Share to TwitterShare to FacebookShare to Pinterest
Labels: Being Grateful, Moving House, On My Bike, Rhubarb.