Maybe I've brought too much stuff to the holiday let. It was difficult to know what would be needed as I've never had a 4 week "holiday" before. After finishing the cleaning at the cottage on Wednesday I brought another car load......some things were left for me to use for cleaning, other items brought because I didn't know what was here and one or two things found that had  missed being packed. So, knowing my car is in for it's MOT on Monday and needing it cleared,  yesterday I took everything to BiL's garage - thank goodness he has spare space after doing a big tidy-up.
It's a good thing that having a clean car isn't part of the MOT as it's muddy on the outside and dusty on the inside. A spotless car has never been high on my priorities list!
How's this for going above and beyond...............................I had a phone call from Andrew the Library Man who had got permission from his boss to hand deliver all the requested books that had been stuck in crates in storage since December directly to each persons home. The mobile will be up and running again in April but as it runs on a four week cycle it will be May before it gets to some villages.  I'd changed pick up point for later requests to Debenham Library but there were 3 books that had already arrived at the mobile depot.
So for the first time since December here's a library book photo 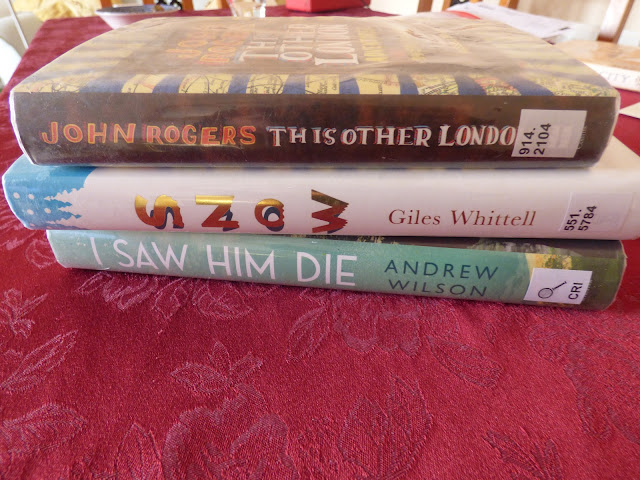 Andrew said he has 300 books to deliver, I said I hope he was getting money for petrol for his car and he is. He's just pleased to get out and about after nearly 3 months at home and this will get all the books back into circulation.
No idea why I ordered the London book and the book about snow is a month too late but I'm really looking forward to reading "I Saw Him Die" it's another by this author featuring Agatha Christie solving a crime in her spare time between writing her own crime stories......a clever concept. This is the 4th he's written in this series. The mobile library is next due in my new village in early May so hopefully I'll just be able to walk up the road which will be a treat.
This week I've been grateful for
Thank you to everyone for comments yesterday.
Hope you all have a good weekend, I'll be back Monday
Sue
Posted by Sue in Suffolk at 07:00
Email ThisBlogThis!Share to TwitterShare to FacebookShare to Pinterest
Labels: Being Grateful, Library book photo