Full moon tonight at 23.48 but whether we see it or not is a different matter. There have been more nights cloudy and mild rather than clear and frosty this winter so far.
January's full moon is called the  Wolf Moon, named by Native Americans and medieval Europeans due to the howling of hungry wolves coming close to the villages looking for food. Other names for this month's full moon include old moon and ice moon.

With only a cheap diary this year it doesn't have the days for full moons etc so I found this  moon phases calendar online and of course I have the moon phases gadget on the right which changes as the nights roll by each month. 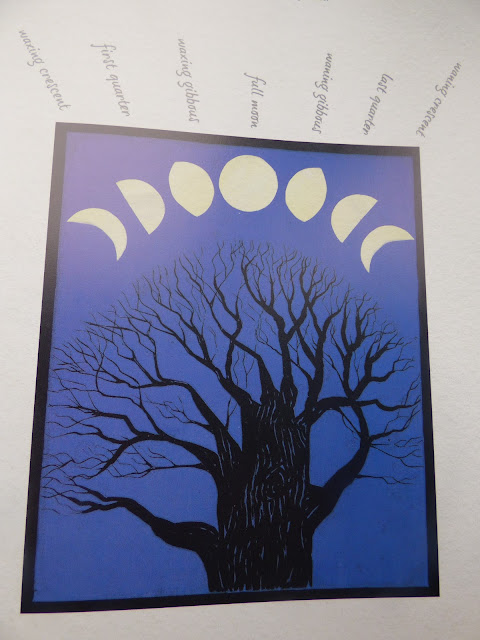 It was youngest Granddaughter who gave me the idea for this post as she pointed to the moon appearing as they were going out the front door last week around 4pm. Why is the moon there when it's daytime she wanted to know. Good question. Then she was saying something about the boy who lived on the moon? And I tried to think of the nonsense rhyme..........

The Man in the moon came down too soon
And asked the way to Norwich,
He went by the south
and burnt his mouth
by eating cold pease-porridge

Which ever bit of memory did that come from? and does it, like so many rhymes, have some sort of historic story . Daughter in Law said she'd never heard of it, but thanks to Listen With Mother, probably the only children's radio programme in the late 50's, I seem to remember all sorts of children's nursery rhymes. If only I'd kept a book I once owned on the history of children's rhymes by Iona and Peter Opie, then I might be able to look up the origins, but the book has gone and the origins are probably lost in history.

The entry on wiki mentions countries all round the world that have traditions about the man in the moon and JRR Tolkien joined in with a poem.........
The Man In The Moon Came Down Too Soon
There is an inn, a merry old inn
beneath an old grey hill,
And there they brew a beer so brown
That the Man in the Moon himself came down
one night to drink his fill.

The ostler has a tipsy cat
that plays a five-stringed fiddle;
And up and down he saws his bow
Now squeaking high, now purring low,
now sawing in the middle.

The landlord keeps a little dog
that is mighty fond of jokes;
When there's good cheer among the guests,
He cocks an ear at all the jests
and laughs until he chokes.

They also keep a hornéd cow
as proud as any queen;
But music turns her head like ale,
And makes her wave her tufted tail
and dance upon the green.

And O! the rows of silver dishes
and the store of silver spoons!
For Sunday there's a special pair,
And these they polish up with care
on Saturday afternoons.

The Man in the Moon was drinking deep,
and the cat began to wail;
A dish and a spoon on the table danced,
The cow in the garden madly pranced
and the little dog chased his tail.

The Man in the Moon took another mug,
and then rolled beneath his chair;
And there he dozed and dreamed of ale,
Till in the sky the stars were pale,
and dawn was in the air.

Then the ostler said to his tipsy cat:
'The white horses of the Moon,
They neigh and champ their silver bits;
But their master's been and drowned his wits,
and the Sun'll be rising soon!'

So the cat on the fiddle played hey-diddle-diddle,
a jig that would wake the dead:
He squeaked and sawed and quickened the tune,
While the landlord shook the Man in the Moon:
'It's after three!' he said.

They rolled the Man slowly up the hill
and bundled him into the Moon,
While his horses galloped up in rear,
And the cow came capering like a deer,
and a dish ran up with the spoon.

Now quicker the fiddle went deedle-dum-diddle;
the dog began to roar,
The cow and the horses stood on their heads;
The guests all bounded from their beds
and danced upon the floor.

With a ping and a pang the fiddle-strings broke!
the cow jumped over the Moon,
And the little dog laughed to see such fun,
And the Saturday dish went off at a run
with the silver Sunday spoon.

The round Moon rolled behind the hill,
as the Sun raised up her head.
She hardly believed her fiery eyes;
For though it was day, to her surprise
they all went back to bed!

Thank you granddaughter W for giving me an idea for a post!