Because I'd found out about Plough Sunday and Plough Monday back in 2019 for the post below  I knew a bit about it but it was quite a surprise to find the the village church still celebrates it with Morris Dancers and blessing a plough.
Plough Monday, next after that Twelfth tide is past
Bids out with the plough, the worst husband is last
This is part of the 2019 post.........
Plough Monday, the first Monday after Twelfth Night was the day the agricultural year started, but before they began  their hard work, the plough men and boys took the opportunity to have a bit of fun by dressing up, blacking up, and processing around the village to perform a plough play and hopefully be given some money.  The plough was often blessed in the church on the Sunday before, so the day was named as Plough Sunday.


Turn out for plough Monday
Up, fellows now
Buckle the horses
And follow the plough. 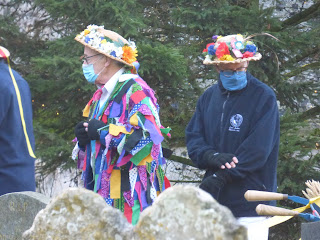 and went back in again. I waited a bit more but hanging around in the chilly shade of the church got a bit cold. So I gave up, took a photo of the very old decorated plough and went home! 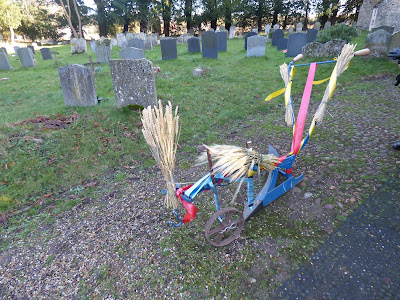 The English Year book mentioned above has several references to Plough Sunday through history including..............From a journal called Folk-Lore, published in Bedfordshire in 1926 .......
Plough Monday - all the boys and men at farm work disguise themselves with odd costumes and masks and patrol the streets singing and shaking tins and saying " Give poor ploughboys a halfpenny or a penny". They knock on doors and, on being admitted, sing and sometimes dance, and expect money and beer or wine.
And From The Times in 1954
Plough Sunday was commemorated at several churches yesterday. At Heddenham, Norfolk, the rector blessed a plough which had been placed in the chancel and offered prayers for all engaged in agriculture. In the city of London a ceremonial plough which 24 men and women who work in the fields of Dorset brought up from Springfield, near Dorchester, was blessed at St. Helens Bishopgate. After the service, 12 Dorset men dressed in traditional costume performed the plough dance play in the churchyard.
After the 1950's the tradition seems to have died out....................... except here!
Back Tomorrow
Sue

Posted by Sue in Suffolk at 06:00
Email ThisBlogThis!Share to TwitterShare to FacebookShare to Pinterest
Labels: Folklore, Village Life