There have been a couple of frosty morning sunrises this week . I know what the weather is like at night by how many lights are visible on the tall mast by the A140 - it was a  Anglia TV mast originally. 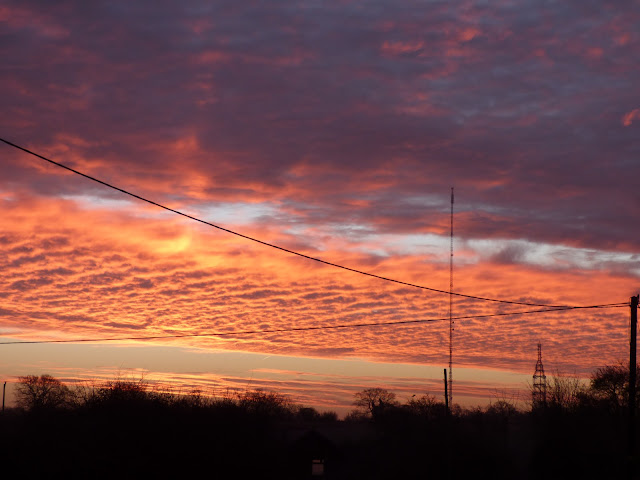 From Clay Cottage I could see it out of my bedroom window - here it's visible from the front door. When the weather is clear there are 7 lights spaced out all up the mast. It's quite a landmark.

Nearly forgot I had this photo on the camera . It's a touch of colour in the garden on a tall shrub in the border - a winter flowering Viburnum? that's what I thought it was last May when I arrived here and it had leaves. 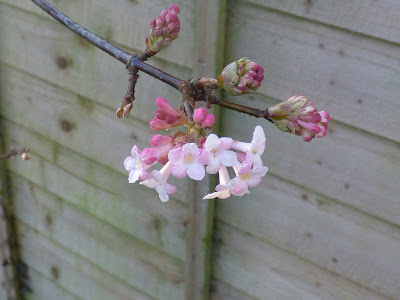 The two different Magnolias are beginning to show buds, but no sign of snowdrops or aconites and the only crocuses are the ones I've planted in pots by the front door. Might need to rectify those absences sometime because I like early signs of spring.

Last weekend I decided to make some plain Suffolk Rusks for a change from rich and sweet Christmas cake. Rolling the mix out  I realised I'd used plain flour instead of Self Raising.(Idiot!) So rolled it a bit thinner and used it to line a quiche dish, which was baked blind and then filled with a bit of grated cheese, the last two slightly bendy carrots - grated, and the end of a packet of pine nuts (used in the ricotta and spinach lasagnas made for freezing before Christmas). Which might sound odd  but with plenty of pepper in the egg/milk mix it tasted really good and saved the pastry, the carrots and the pine nuts.

Are you fed up with covid stories from Downing Street and Australian tennis? I am, even though I try not to listen, so my better news story is hearing the the Robert Harris book "Munich" has been turned into a film, unfortunately only on Netflix and "selected cinemas" which doesn't include the Regal in Stowmarket! so I'll need to wait a while. The book, which I read in May last year, was so good and the film sounds equally brilliant.
But going back to Downing Street - there was one thing I heard which I didn't know or hadn't even thought about. Numbers 9,10,11 and 12 Downing Street are all joined and are really a four storey block of several dozen offices. Numbers 10 and 11 also include a flat for the PM and the Chancellor and all the blocks have access to the communal gardens. We only see the front door on TV - I hadn't realised they were so big. No comment on the parties!

Back Monday
Sue
Posted by Sue in Suffolk at 06:00
Email ThisBlogThis!Share to TwitterShare to FacebookShare to Pinterest
Labels: Being Grateful, In the Kitchen