Mostly days this week were a bit grey and chilly except for Thursday when the sun shone for much of the day. As I was suffering with tired-itus it seemed wisest to stay at home and hibernate again. I missed the Over 60's Club meeting but there's another one next month! So books were read, blog posts were drafted and TV was watched.

That makes for a  random odds and ends post about nothing much .

A new police drama with Martin Freeman (he seems to be everywhere) started on Monday night - I watched some of it but  a policeman having a breakdown was something I could do without so I won't watch anymore. The new Sunday night bomb-disposal police thing was a much better watch although the bomb at the end was a shock and.... spoiler alert........ killing off one of the main actors in the first episode seems a bit odd.

On Tuesday I thought I saw my cousin on Bargain Hunt. He lives in Ipswich and the programme was from Newmarket and he does sell stuff at Antique Fairs, it probably wasn't him though. I'll have to ask him at the next funeral we meet at!

Wednesday and the grass felt dry enough just to run over it quickly with my battery mower, which because it had been standing in the shed for months, had lost a lot of charge so I didn't quite get finished. Grass cutting in January wouldn't have been a thing years ago. Grass grows at any temperature over 6℃ and there have been many days around that and above.
I got the job finished front and back on Thursday when there was a breath of wind to dry the grass again.
Another TV programme I've been watching is Brokenwood which is New Zealand's answer to Midsummer Murders but with humour and better scenery! It's on UKTV Play. The earlier series were on TV over the past years but I hadn't seen the most recent.
The  reading  has been a couple of books from my shelves ready for a blog post next week and this, 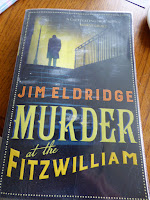 which is one of those books that made me cross because the language used - for a Victorian lady - was just So wrong! Oddly the book by this author that I read in December, which was set in the London Blitz was much better.
Another job done was to varnish my clay plant labels so they are ready for use when spring and my gardening mojo returns. And finally my £10 reward evoucher came from The Office of National Statistics for doing the survey, I chose Asda and the printer co-operated to print it out.
By yesterday I was feeling fully recovered from tired-itus and beginning to think I could quite get into the habit of being lazy if I stayed at home any longer! So I'd better plan a trip out today - a church visit and charity shops I think.

Have a good weekend
Back Monday
Sue
Posted by Sue in Suffolk at 06:00
Email ThisBlogThis!Share to TwitterShare to FacebookShare to Pinterest
Labels: Being Grateful, TV