Thanks to everyone for comments yesterday and apologies for not replying.

It's crazy how many books I've read since I picked them up from the library van. All due to snooker being on TV which is something I can half watch but read at the same time and the books being crime fiction which I tend to race through as they don't take a lot of effort to read.

Marion Todd - In Plain Sight.  This is the second story featuring DI Clare Mackay and set in St Andrews Scotland.

When a baby disappears from her push chair at the start of a charity fun run - there seem to be no clues and no reason for her being snatched. But why are so many people hiding things and is the appearance of a known drug dealer in the area relevant.

As Clare investigates she realises this victim wasn't selected at random. Someone knows who took the baby girl, and why. But will they reveal their secrets before it's too late?

So similar in many ways was this one by  Ros Watkins - The Devil's Dice.

The debut crime thriller from this author. Featuring DI Meg Dalton a police officer returning back to her home county of Derbyshire. When a lawyer is found dead in a cave some people think it's connected to a curse.
Amidst rumours of a local curse, DI Meg Dalton is convinced this is cold-blooded murder. There's just one catch – chiselled into the cave wall above the body is an image of the grim reaper and the dead man's initials, and it's been there for over a century.
As Meg battles to solve the increasingly disturbing case, it's clear someone knows her secrets. The murderer is playing games with Meg – and the dice are loaded…

Totally different, even though it's crime fiction, is this by S.J. Bennett - The Three Dog problem.

This is the second in a series in which Rozie Oshodi, The Queen's Assistant Private Secretary, assists the Queen in solving a mystery.
A referendum divides the nation, a tumultuous election grips the United States - and the body of a staff member is found dead beside Buckingham Palace swimming pool.
Is it a tragic accident, as the police think? Or is something more sinister going on?
As Her Majesty looks for answers, her trusted assistant, Rozie, is on the trail of a treasured painting that once hung outside the Queen's bedroom.
But when Rozie receives a threatening anonymous letter, Her Majesty knows dark forces are at work - and far too close to home. After all, though the staff and public may not realise it, she is the keenest sleuth among them. Sometimes, it takes a Queen's eye to see connections where no one else can .
This book was written before the death of Prince Phillip and his intelligence and the humour between Prince Phillip and the Queen in the book which the author guesses at, were proved to be true after his death when we learned so much more about him.
These have been compared to Richard Osman's books  because they are both totally improbable but I reckon SJ Bennett writes totally improbable in a much better way than Richard Osman!
I couldn't get into two of the other library books  and fancied a change from crime so picked one of my own Home Front books, that I've had for years unread, off the shelves. 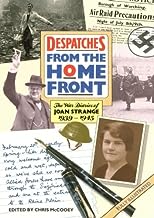 It's a wartime diary written by a lady living in Worthing on the south coast. She is a physiotherapist and also very involved in refugee work involving people who escaped from Germany and Austria. I have several war diaries and anything written at the time seems more real than books of memories written years later. Once this is finished I'll get back to the rest of the crime from the library.
Back Tomorrow
Sue
Posted by Sue in Suffolk at 06:00
Email ThisBlogThis!Share to TwitterShare to FacebookShare to Pinterest
Labels: Book Reviews