Epiphany is the  Christian Feast day marking the visit of  the Wise Men from the East bringing their gifts to the baby Jesus. 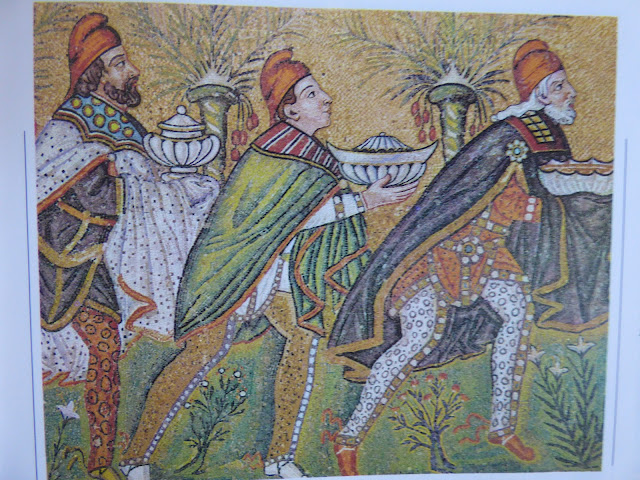 The photo above is from my book 'A Calendar of Saints' and is described as mosaic,S.Apollinaire Nouvo, Ravenna.

January 6th is the day celebrating Balthasar, Caspar and Melchoir  but nowhere in the Gospels does it say there were 3 wise men although as there were three gifts that was deduced early on. In the Book of Psalms it says The Kings of Tharsis and the Isles shall offer presents and the Kings of Arabia and Saba shall bring gifts. This prophecy was soon linked to the wise men and in the 2nd century they were given the names mentioned above.

Twelfth Night has two traditions. First is that all Christmas decorations should be taken down, although years ago Christmas festivities went right on until Candlemas(Feb 2nd) and it was only then that the greenery had to be taken down and burned.

Secondly it's the day to Wassail the Apple trees when cider was poured on the roots and toast soaked in cider was hung in the branches.

This tradition was kept going or revived, especially in the West Country and Herefordshire and by me for several years at the smallholding and Clay Cottage. It's going to be years before I see any apples on my baby trees here but perhaps I should pour a carton of apple juice over them to keep the tradition going.