Whoop Whoop Hip Hip and Hooray!! Cam Norrie is through to the Semi-finals at Wimbledon - unfortunately he has to play Djokovic..............

When I wrote about the tip for getting  Basil cuttings to root in water, I mentioned making pesto to use in a recipe called Courgette Crumble and Ang asked for more details.

So I'll start with the Crumble Recipe (you can see I've had this a while as it was cut from the Somerfield Magazine, and Somerfield disappeared years ago). When the children were at home I would serve this up with chips to persuade them to eat it!

I don't use Parmesan either in the home made Pesto or in the crumble topping but just some grated cheddar instead and I use a bit of garlic from a tube rather than fresh as I don't eat enough of it to make it worthwhile buying or growing.It doesn't need the salt. Pine nuts are very expensive but I use them when I make the spinach and ricotta lasagne so buy a small bag for that, wrap up the remainder tight and peg closed and store in a tub in the fridge. I think years ago I just went without.

Hadn't actually made Courgette Crumble for a while but with the basil growing so I could make a tablespoon of pesto and with an overload of courgettes I made a small crumble at the weekend and just like years ago I served it up with chips but mine were a handful of  Mixed Vegetable Fries which I discovered in Morrisons freezers a while back. 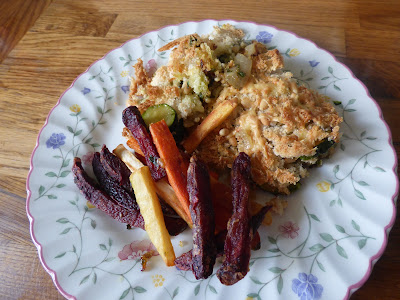 And then other idea is Courgette Fritters

For one person I used 1 courgette, grated and squeezed as dry as possible, handful of frozen peas - defrosted. Mixed with a a tablespoon of flour, half teaspoon baking powder (not sure that's necessary) a small egg, small pinch salt and good amount of black pepper and half a teaspoon whichever seasoning you fancy - the recipe says cumin, but I used curry powder.

Drop spoons full into hot oil in frying pan and press down, turn over when browned. For a different version of most fritter type recipes some grated cheese can be added but I didn't this time  but I served up mine with a couple of rashers of bacon and some tomato ketchup. 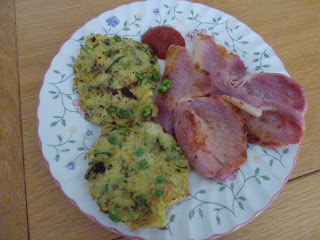 That's a few less courgettes to give  away or compost!

I've added the recipes to the Recipe Page

Posted by Sue in Suffolk at 06:00
Email ThisBlogThis!Share to TwitterShare to FacebookShare to Pinterest
Labels: Courgettes, Recipes