I believe some parts of the country have had sunshine and a wee bit of warmth this week, but here we've had freezing strong North East winds and lots of grey-ness with low cloud, drizzle and rain and just a few minutes of sunshine..............  It can only get better......unless it get worse!

When the kitchen man finished and left for the last time I thought it would be the end of workmen for a while but then found a tiny puddle in the bathroom behind the new wash basin. I thought it was easily solvable if one of the fittings was a bit loose but no, the water seemed to be appearing from under the wall..... an outside wall,  behind the sink. I kept mopping it up and it kept re-appearing, not all the time but now and again. Also faulty was the bath panel on the new bath...........it just kept falling off. A man came and the panel has now been fixed properly but of course there was no sign of the small puddle. What ever taps he ran - no trickle of water..........How typical!

It's been weeks since I found anything to buy when I'm at the charity shop but some little boys new M&S pants came in while I was there this week and Jacob loves cars and especially the Cars that are the Disney Pixel Cars, maybe these will help with the toilet training. I'll send them down to Surrey. 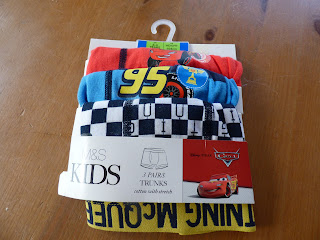 Thursday was exciting, because I met up with Rachel who writes her blog from not far away from me but in Norfolk. We met in Morrisons cafe in Diss which is about halfway between us as I needed to go to the Grape Tree for some dried fruit. It was good to have an hour with another blogger. I'm sure we'll meet up again.

I went to see youngest daughter and Florence on Friday, we went for a walk round the charity shops, found a Peppa Pig book for Florence and by chance another book I'll mention next week.

Son and DIL + Willow are popping over today. Poor DIL goes back to work after her maternity leave on Monday.......she's not looking forward to it.

That's good, another week of winter  survived. Each week takes me closer to Spring.

Posted by Sue in Suffolk at 06:00
Email ThisBlogThis!Share to TwitterShare to FacebookShare to Pinterest
Labels: Charity Shop Finds