My first day of the month post is a day late - better late than never! 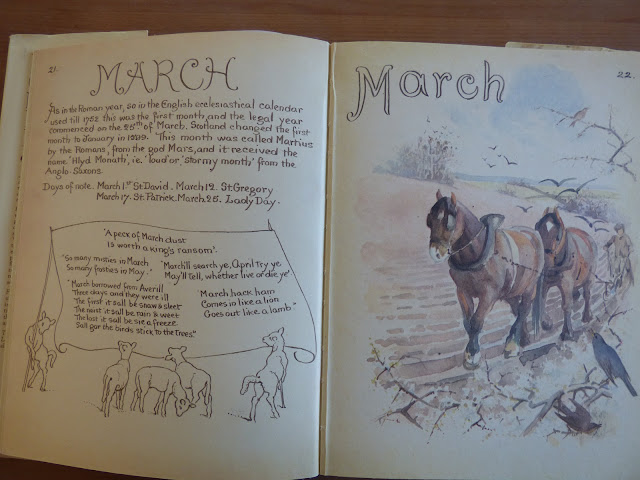 In the Roman calendar March,or Martius, was the first month of a new year. The month was named after Mars, the god of war and the guardian of agriculture. March was the month when both farming and warfare could begin again after winter.

The Saxons called it Hlydmonath meaning loud month for the windy weather or Lentmonath, meaning lengthening month, because of the equinox and lengthening of days and this is the origin of the word Lent.

There are many weather sayings,  the best known is

March winds and April showers
Bring forth May flowers.
One of the old weather says in the diary above says
March'll search ye
April'll try ye
May'll tell whether live or die ye
So I guess if we all get to May we''ll know we are OK !
I found one poem in my little book of Country Poems that mentions crows in the winds of March
The Crow
How peaceable it seems for lonely men
To see the crow fly in the thin blue sky
Over the  woods and fields, o'er level fen
It speaks of villages or cottage nigh
Behind the neighbouring woods- when March winds high
Tear off the branches of the huge old oak.
I love to see these chimney-sweeps sail by
And hear them o'er the gnarled forest croak,
Then sosh askew from the hid woodman's stroke
That in the woods their daily labours ply.
I love the sooty crow, nor would provoke
Its March day exercise of croaking joy;
I love to see it sailing to and fro
While fields, and wood and waters spread below.
John Clare (1793-1864)
(My Shorter Oxford Dictionaries are packed in a box so I can't look to see if there is a definition of sosh!)
Back Tomorrow
Sue
Posted by Sue in Suffolk at 07:00
Email ThisBlogThis!Share to TwitterShare to FacebookShare to Pinterest
Labels: Folklore