After 4 years I've just about got used to being able to go out and about on Bank Holidays. 2015 was the last year we were at the smallholding with the campsite open for what was always the busiest weekend of the year.
I can remember one sunny year when tents just kept arriving - and we ended up putting some on the hay-field, there was even a yurt!

Actually I haven't yet decided what to do this weekend so not sure where my out and about will take me, it's all weather dependent. What I really should do is get the paint out to do all the bits that got damaged when the kitchen was fitted, the scratches and scrapes are beginning to annoy me.

Monday morning started with no electric - bother. I discovered something had tripped the trip switch which is out in the garage so spent ages going round indoors, turning things off, going out to the garage and trying the trip again........all with no luck. Had a think and decided to turn off all the fuse things which are in a cupboard in the back porch and then try the trip, and it stayed on. So one by one I switched the fuses back on and found the one that made the trip flip off was the one that said 'Upstairs Sockets' .
So back upstairs and check round - Nothing switched on. Looked all round the house AGAIN - by which time I was getting a bit fed up - and found the fridge switch that I'd forgotten about because its under the kitchen worktop with just a little junction thingy with a light that shows the fridge is working on the wall above. Switched off that switch and Hey Presto! But WHY is the fridge plug on the upstairs socket circuit??  Just one more thing to sort..........was it the fridge or the plug on the wall? Answer = Sadly it's the plug on the wall. Electrician needed,  which will probably cost more than buying a new fridge and a darn sight more difficult to arrange although I was quite pleased that I'd found the cause and got everything back on and working again, even the fridge -  by using an extension lead. Another thing that in the past I would have left to Colin to sort, he would have found the problem in half the time!.

One morning this week I went to the surgery to pick up.............................2 bottles of wine! The week before I'd popped to a Friends of Mendlesham and Bacton Surgeries coffee morning. I had £1 worth of draw tickets and left my phone number and got a surprise when the phone rang later to say I'd won 2 prizes. I don't drink but there are plenty of family who do so they won't go to waste.

All the small plants that were in the greenhouse in my photos earlier this week are now planted out and protected from pheasants, ducks, pigeons, cat  and any strong winds that might come blowing across the fields.........it's a complicated business!
The sweetcorn, chard and parsley are well protected 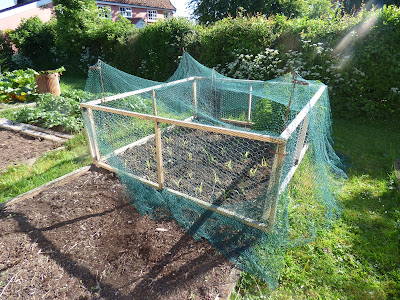 French climbing beans with a sacking wall around the bottom and a fleece tent pegged to the canes.
I'll take the fleece off when the plants get going. 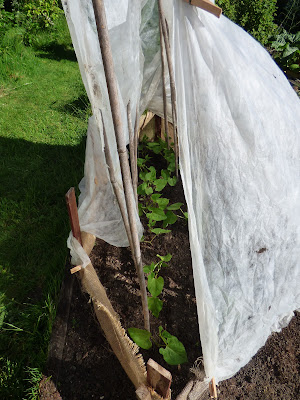 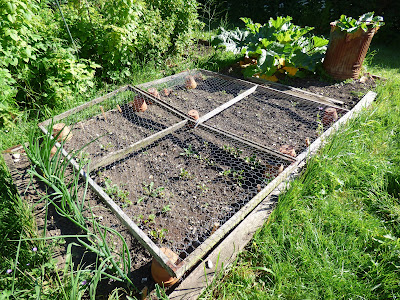 The courgettes are under a fleece tunnel at the moment, just to stop the wind rocking them about until they get well rooted.  I think they'll be OK when I take it off, can't remember from last year  if any of the local pests eats them. I'll need to use the tunnel over the squash plants when I put them down the other half of the bed. 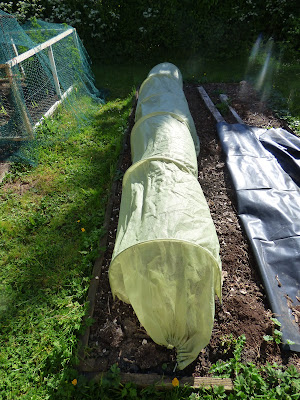 The Chelsea Flower Show has been on TV all week, I'm not a huge fan of  TV gardening  programmes they make me feel inadequate.  But no one can expect to compete with the Chelsea show gardens, they are mostly so un-real, make it possible to watch without feeling hopeless. My sister and her husband are off to visit the show today and for a moment I was envious, then thought - no - all that walking about - all those crowds - better off watching on TV. (Like Wimbledon tennis!, which reminds me - The French Open starts on Sunday, it's on ITV 4 I'm pleased to say)

Swimming, shopping, visiting youngest and Florence, sitting in the sun and my week has gone by - alone - but still getting through.

Have a good weekend, hope the weather isn't too disappointing.