It's been so good this week to have a few warmer days, Wednesday was the best as the East wind dropped away making it warm enough to sit out a while in between gardening and grass cutting. My gardening mojo came back with the sun - thank goodness and I spent a while clearing a huge patch of hooligan "foreign" bluebells out of the oval rose garden. What started as one small clump two years ago had got to an area nearly a metre round. They are pretty but just so invasive. I've replaced them with the rose "Thinking of You" that friends had sent last year when Colin died. Also started the big job of edging round that bed...........it has two rows of bricks, laying flat set into the ground that grass and weeds grow through........ and I'm also weeding in the quarter circle muddle - it's full of aquilegia again, they are invasive too but in a nicer way.

My shabby-chic ladder isn't so shabby this year as I gave it a coat of paint before putting it away in the autumn. 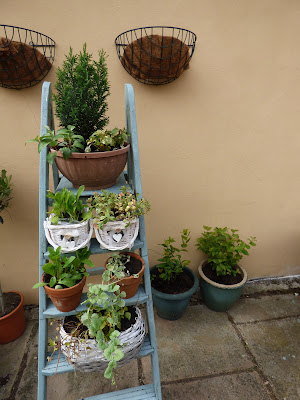 It's almost planted up, I managed to drill holes in the clay flower pots (which were here when we moved in) to thread a wire through so I could wire them onto the ladder sides, that saved me spending more money on things to stand on the ladder. Just 50p spent on the two little square baskets from a boot sale. Must find something for the bottom rung -  perhaps 3 pots wired together.
To the right of the ladder (dreadful photo - I was in a hurry) are my two small Blueberry bushes that came with the bargain offer from T&M earlier in the year. One is looking better than the other but both are much healthier and bigger than when they arrived. Above are the two flat backed baskets waiting for Tomato Cascade to be planted. I'll need to put something else in to hold compost as the Poundland coir liners aren't big enough. Some plastic at the back and sides should do it.
I was pleased to see a frog return to the mini pond, hadn't seen one in there since I hauled out lots of oxygenating plant last autumn 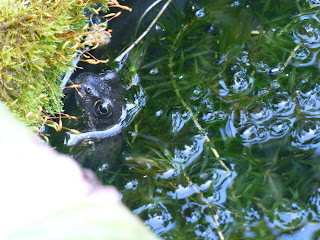 It's only a tiny pond but keeps a couple of frogs happy. 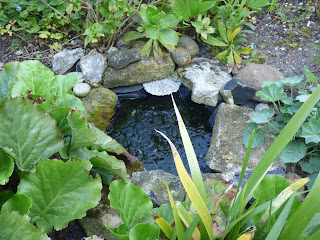 Swimming early for the last few weeks  at a general swim-for-all session is working well, aiming to leave home by 7.45am, in the pool by 8.15 and out before 9,  home by 9.30. With plenty of morning still left to get some housework done. Such a good way to start the day, if I lived within walking distance I'd go every day............maybe.

It was nice to catch up with friends for coffee during the week, they are off out to the States in June for 4 weeks to Pittsburgh where their eldest son, wife and two grandsons live. They go out every year if they can. Their eldest is the same age as my eldest daughter and while living next door to them in 1981 we both had our second child within a day of each other! and they became godparents to our son.  I'm so glad I kept in touch through the years we were across the other side of the county.

I finished reading the excellent "The American Agent" crime fiction by Jacqueline Winspear. Such a good series, the first pubished in 2003 and set in 1929. This new book - the 15th - takes the story through the 1940 London Blitz. It re-introduced a character from three books past, which I now need to re-read because that was back in 2016 and I've forgot the circumstances in which Maisie first met the American of the title. I really recommend these books if you haven't come across them but it's best to start at the beginning with the first..... "Maisie Dobbs".


Thank you to everyone for comments about the photos of the houses we rescued. I'm sure everyone thought we were mad to keep moving but we were young, had no money but plenty of energy and didn't stop to think of the problems, we just wanted to own some land and be as self-sufficient as we could. All the house restoration programmes that are on TV now weren't thought of back then so there was nothing to put us off!

And finally........
Hands up if you have ever got up one morning, gone in the kitchen and found a mole limping across the floor toward you?
T'was  a bit of a surprise,  Polly cat must have brought it in, makes a change from mice.
I won't tell you what I did with it as that would upset animal lovers!


Posted by Sue in Suffolk at 06:00
Email ThisBlogThis!Share to TwitterShare to FacebookShare to Pinterest
Labels: Being Grateful, Blueberries., The Garden