As I mentioned last week when writing about talking at big WI, May is always Resolutions month, when we discuss the Resolutions that have been chosen to be voted on at the National AGM and then campaigned for during the next year.

There is always much more discussion at small WI compared to big WI which is why I like going to two such different WI groups.

We had 2 things to discuss this year

A call against the decline in local bus services
Over the last decade there has been a massive decline in the number of bus services, particularly of those in rural and semi-rural areas. In order to alleviate loneliness, improve health and wellbeing, as well as promoting sustainable development, the NFWI calls on the government and local authorities to increase subsidies and work in partnership with bus companies and community transport operators to enable an adequate provision of services.

Rural buses are virtually non existent  around this part of the county now. Back when the children were small and we lived in the village of Bacton I could catch buses to Stowmarket several times a day, and to Bury St Edmunds  and Ipswich  every day.  Then came cutbacks, changes to funding even free over 65's bus passes haven't helped as that slows down the income for the bus companies.

I haven't used a bus service for years. At the smallholding the nearest bus stop was a mile away in the opposite direction from the town which was just 2½ miles - so I often cycled or drove for the big shopping. Where I live now there is a bus stop 2 miles away with two buses a day going to Ipswich.
We agreed that not many people would choose to live in a village nowadays unless they could drive.

We instructed our representative ( a lady from another WI who will be voting on behalf of 5 WIs) to vote FOR the resolution, in the hope that the new push for greener transport might encourage government to help councils take cars off the road by providing buses. None of us were very hopeful!

The second Resolution this year is

This seemed a no-brainer but there was still lots of discussion.We all said we should check that our daughters had been.

We instructed our representative to vote FOR the resolution. Sometimes their are changes when it comes to the actual AGM so we gave discretion for them to abstain if necessary.

I won the bunch of flowers (with awful vase) in the draw again. But left the vase with the president as I'm not sure I'll go to the June meeting - it's a garden party so much sitting around talking - I'm not good at that anymore (actually I never was!).

Not sure who won flowers and vase last month, but the bunch they brought for this months draw were already looking sad when I got them. 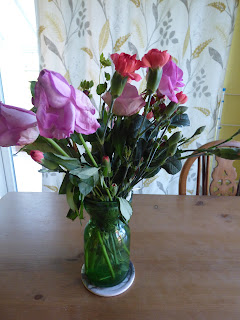