2nd Week of May and Busy in the Garden

The Swifts are back in the village, I saw it on the local Facebook page and then saw them myself when I went round to the Health Centre to pick up my prescription. It's lovely to see them circling around the church. I ended up going back to the health centre twice more - the dispensary are in chaos - like so many others with a shortage of staff and supplies. It used to be so straightforward but now reminds me of the year in Ipswich when it was quite normal for them to take half an hour or more to find either the tablets or the form or neither!

On Thursday I went up to Morrisons in Diss and met up with Rachel-in-Norfolk. The coffee machine decided not to work the minute I stood in front of it as usual - but I ended up with one and a half cups of coffee for the price of one so that was OK.

It was a really good gardening week last week as I got all the small greenhouse plants into their big pots...I seem to have rather a lot of tomato plants so should be able to give away tomatoes, make tomato chutney and eat tomatoes all summer! I've got 4 Aubergines and 4 to pass on and 6 pepper plants and gave away 2.
I bought some wire and threaded it round the greenhouse through the little metal attachments so that's ready for tying the canes to for holding up the cucumber and tomato plants as they grow, also bought some short canes for the pepper and aubergine pots.

With perfect timing Brother-in-Law Andrew came over on Wednesday morning to finish the connection on the biggest water-butt and to connect the small one at the front and two hours later it started raining - the first proper rain we've had for weeks. It rained on and off for a few hours and was much needed and should have done the shrubs and trees a bit of good, but it didn't put much into the water butts.

Andrew said was I going to let that weed outside the shed get any bigger or I wouldn't be able to open the door! It's not a weed it's a Foxglove and I'm leaving it there until it's flowered. 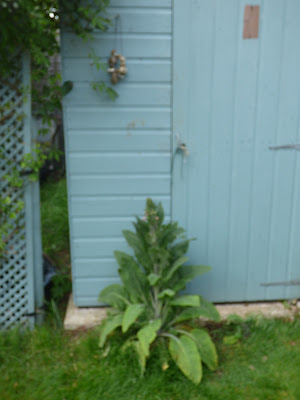 I said big expenses for the garden had all finished but I didn't mention plants did I?

Just can't resist, so I found myself bringing home a Red Hazel from the plant stall at the Water Mill and 4 pots of Alstromeria plants from last Sunday's car boot.......these were a big bargain at £2 a pot. Stonham Barns car-boot organisers don't allow stalls with only plants because there is an on-site nursery but they don't mind people bringing a few so that means plants for sale are from private sellers and not trade and are cheaper.....like my sage for 50p a couple of weeks ago. 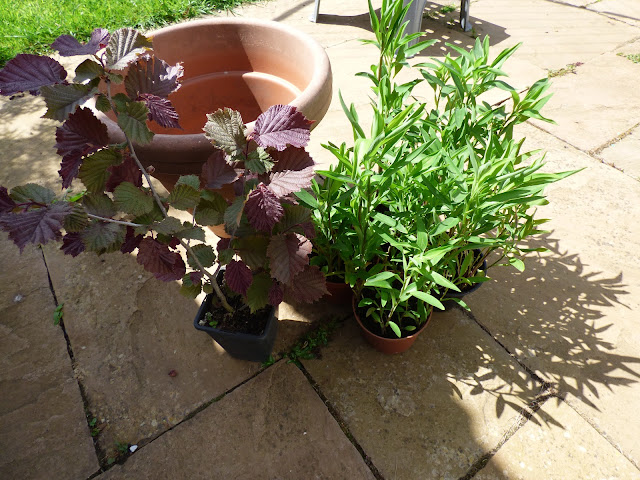 I left a big Red Hazel tree at the smallholding and a huge bed of Alstromeria that I grew for cutting and selling and I tried 2 or 3 times to get Alstromeria going at Clay Cottage with no luck. Hopefully they will do better here. To make room for the Hazel I've taken out a half dead Hydrangea and that's made room for it to get quite big before I have to start cutting it back and from much the same area I cut a climbing rose right back as it was covered in greenfly.

The patio is looking good after weeding.............not with weedkiller, or pressure washing or by sitting on a stool and pulling them out one by one but with the brilliant tool in the photo below. It's got metal bristles that get right in the gaps and clean out all the dirt, moss and weeds. 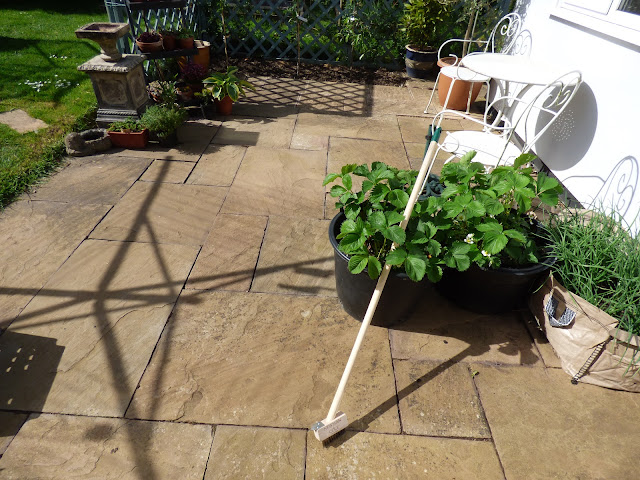 Job done with just a bit of work.
Hope you all have a good weekend.
I'll be back Monday after  I've been to 'Weird and Wonderful Wood' and boot sales of course.
Sue
Posted by Sue in Suffolk at 06:00
Email ThisBlogThis!Share to TwitterShare to FacebookShare to Pinterest
Labels: Car Boot Bargains, Greenhouse growing, The Garden